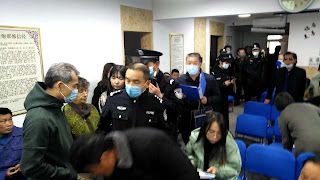 CCP authorities simultaneously seized two other coworkers at their homes. From January 28 to 31, 2020, when the five coworkers traveled to Malaysia and attended the “Gospel and Culture Conference 2020), they all held a passport the PRC had issued and cleared customs without any problems. Now, however, CCP officials consider attending this conference a new crime.

When An Yankui, minister of Xuncheng Reformed Church, learned that police had arrested the five coworkers, he sent out an urgent prayer letter, asking Brothers and Sisters of each church to immediately intercede for them; to follow this event. Minister An prayed:

May the Lord not abandon his children

and grant grace and mercy to his Church

on the path of the cross.

The fabricated charge of “illegally crossing the border” for the five Christians being criminally detained relates to the Administrative Measure of Religious Staff that the National Religious Affairs Administration issued in February, effective starting May 1. Compared with other documents, the Administrative Measure of Religious Staff added new content that bans overseas religious groups’ support. The decree includes resisting overseas religious forces.

In addition during the spring, due to references to the online “Gospel and Culture Conference 2020,” the Bureau of Ethnic and Religious Affairs, Community, State Security officers, and police harassed ministers residing in other regions. The CCP representatives visited the ministers’ places [homes and churches], spoke to them, checked their IDs, and warned them not to continue to contact overseas individuals and groups [forces].

Because he has repeatedly chastised the State’s crackdown on religions, as well as encouraged persecuted Chinese churches and Christians, CCP authorities regard Pastor Tong as a threatening overseas force. This year, State officials have even targeted those who attended the gospel conference. They have also removed the official WeChat account of Pastor Tong’s team and deleted his sermon videos.

###
~ (NKJV)
China Aid exposes abuses in order to stand in solidarity with the persecuted and promote religious freedom, human rights, and rule of law. If you wish to partner with us in helping those persecuted by the Chinese government, please click the button below to make a charitable donation.