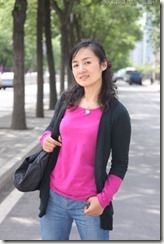 China Aid Association
(Beijing—Nov. 24, 2011) Beijing police have criminally detained the chief representative of a company that produced and distributed copies of a new documentary by filmmaker Rev. Yuan Zhiming, once on the Chinese government’s most-wanted list, ChinaAid has learned.
Special agents of the Domestic Security Department in Changping District took Jiang Yaxi, the “enterprise legal person” of the Beijing Shamozhihua (Flowers in the Desert) Television and Film Co., from her home at 7 a.m. on Nov. 11.  (See photo at right of Jiang Yaxi.)

According to sources, she had been under investigation since August because her company had produced and sold copies of Yuan’s latest documentary “Beyond,” an epic nine-part series that tells the stories of overseas Chinese Christians.  Even though her company went through proper channels to legally produce and sell DVDs of the documentary, police have already started formal legal proceedings against Jiang and have placed her under criminal detention, which is the first step in a process that almost always results in conviction of a crime.
The investigation began in early August, when an inspection team of the Beijing Culture Bureau searched the Beijing Chengguang (Dawn) Bookstore and confiscated 40 sets of “Beyond.”  The bookstore was also fined 4000 yuan (US$630) for selling illegal goods.
In mid-August, the Beijing Culture Bureau and the Beijing police staged a surprise raid at Jiang’s company, demanding all company records related to “Beyond,” including sales records and customer records.  With Jiang’s cooperation, the inspection team also searched the warehouse where copies of “Beyond” were stored.  The team confiscated all the “Beyond” products, the exact number of which is unclear.
According to sources, the company was fined 10,000 yuan (US$1575).  Including the value of the confiscated products, the company’s total losses are in excess of 40,000 yuan (US$6,300).
Throughout the entire investigation, Jiang has insisted that since “Beyond” carried an ISBN number, which in China is issued by the government and is given only to publications and recordings that have passed government approval, the documentary was a legal product and her company’s activities were entirely within the law. Therefore, she had no hesitation in cooperating fully with the investigation.
The creator of the documentary, Yuan, was on the Chinese government’s most-wanted list after the 1989 Tiananmen Square democracy movement.  After fleeing from China, Yuan became a Christian in the United States and now lives in California.  In addition to authoring about a dozen books, Yuan is also the creator of several highly acclaimed documentaries, including “The Cross” and “China Soul.”
ChinaAid questions how an approved documentary has suddenly become an illegal product and calls on the relevant government departments to give a logical and reasonable explanation.  ChinaAid also condemns the persecutors and calls for the immediate release of Sister Jiang.  As it has done with the Shouwang Church in Beijing, the government is playing games with the law, acting in an inconsistent manner, and arbitrarily targeting law-abiding Christians.
Nevertheless, we remember the example of Nehemiah, who led the children of Israel when they were in difficulty and without hope to successfully rebuild the Temple, and we echo his prayer.

“They were all trying to frighten us, thinking, ‘Their hands will get too weak for the work, and it will not be completed.’ [But I prayed,] ‘Now strengthen my hands.’” (Nehemiah 6:9).