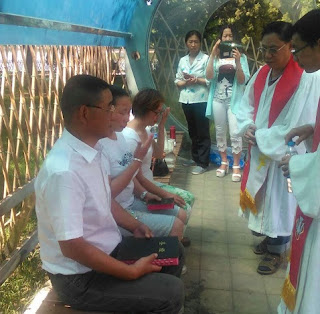 (Beijing—June 19, 2015) A Beijing house switched its weekly worship service to Saturday instead of Sunday due to persistent harassment from local authorities, but last Saturday, police barged into and disrupted the church service, saying it was an illegal gathering.

The Beijing Yahebo Church had already had to move its meeting location four times before the latest run-in with authorities on Saturday, when about 15-16 people were meeting at a cafe in Beijing’s Chaoyang District.

“There weren’t too many people, because we had already changed the meeting time. It used to be on Sunday,” said church elder Hu Shigen on Sunday. “Many people were still telephoning me today, wanting to come to church, but that’s not possible now.”

About six to eight police officers barged into the cafe, saying some member of the public in Chaoyang District had reported the church. The police said the church service was an illegal meeting and that the church was in violation of the regulations of the State Administration for Religious Affairs (SARA) because it was not properly registered.

Minister Xu Yonghai, who is familiar with the Yahebo Church’s Shengai Fellowship, said the church has attracted many petitioners, citizens with a grievance who were unable to get a satisfactory resolution from their local government and came to the nation’s capital to seek redress from the central government.

“Even now, it has many petitioners” among its members, Xu said. “Recently, the police have come to harass them numerous times and forbade them to meet.”

Hu said that after police threatened the cafe owner about the church holding its Sunday worship services there, the church decided to switch to meeting on Saturday. Even so, police showed up, saying someone had reported them. After ordering the meeting stopped, they checked and wrote down the identification of everyone in attendance.

One of the church members described and gave identifying details of five of the police officers. One of the uniformed police officers produced identification showing his name as Li Guanxiong, ID number 031293, from the Chaoyang Sub-Bureau of the Beijing Municipal Public Security Bureau. Another man in uniform said his name was Yue Liqiang and that he was a security guard from the Jinrong Property Company. Another police officer had a video camera and was filming. Two officers were plainclothes and said they were from the Chaoyang District Domestic Security Protection Squad and that they were in charge of minority and religious affairs.

After the police took down the identification details of all the church members, they met privately with a church leader and ordered the church never to meet at the cafe again.

The church members continued their service after leaving the cafe, regrouping at a nearby park to hold a baptism that had originally been planned as part of the service.

Hu said three people were baptized. Two were women who had been released from detention for taking part in human rights protection activities in Qing’an, in northeast China’s Heilongjiang province. The third person was a citizen activist from Liaocheng, in coastal Shandong province.

Hu said on Sunday that the church was holding outdoor services in a park and wanted to continue worshiping in Chaoyang District. This is the fifth time in two years that the church has had to look for a new venue to meet.

Xu said that Yahebo is typical of the thousands of house churches in Beijing, most of which are small gatherings. He said the harassment of Yahebo Church reflects the reality of religious faith in China. “First is that it is not [officially] recognized, and second is that [the government] can nevertheless come and cause trouble and sometimes make it impossible for you to meet. Either by forcing you to move or by closing you down. And there’s nothing you can do,” he said.