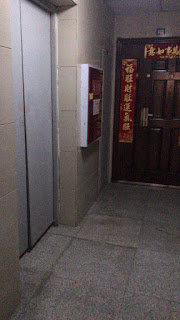 (Chengdu, Guizhou Province—June 07, 2021) During the morning of June 04, unknown individuals chained the door in the hallway outside the home of Wu Wuqing—a minister of Chengdu Early Rain Covenant Church. The door to the fire safety equipment adjoins the elevator and stairs, as well as the currently vacant apartment opposite Minister Wu’s residence.

Several unidentified individuals continually monitor Minister Wu’s place and prevent him and others from going in or out. On the evening of June 04, Chinese Remembrance Day, Minister Wu’s wife suddenly felt ill. When those monitoring him prevented Minister Wu from leaving his apartment, he phoned Church Brothers and Sister living nearby. They delivered medicine for his wife, passing it through the crack between the door and the frame.

Seeing the door to the fire safety equipment still chained at noon of June 05, Minister Wu phoned the Longquanyi District Damian police dispatch. Officers checked the site and spoke to several unidentified people monitoring Minister Wu’s home but did not check on Minister Wu nor communicate with him.
Since the “129” crackdown on Early Rain Covenant Church, Chinese Communist Party (CCP) police have repeatedly summoned Minister Wu and detained him in their station for up to 24 hours. Despite interrogations with intensified pressure to denounce his faith, and 24/7 monitoring, however, God has empowered Minister Wu to stay strong.
Last autumn, officials repeatedly shut off water and electricity to Minister Wu’s residence. At the beginning of May, an unknown person punctured and deflated tires on his car to the point of being unrepairable. On May 8, when police transported Minister Wu to their station, officers detained his wife and several Church congregants waiting for him at the station. Officials vehemently struck Dai Zhichao and Shu Qiong, two congregants in the group.

Heavenly Father, may the Lord watch over His Church and children. Protect Minister Wu Wuqing and his family so that the chain of the evil cannot bind their freedom in the gospel/

Grant them peace and calm in the storm.

The Church also prays that the Lord will instill fear in CCP authorities, that He will handle their malicious deeds justly, so they do not unreasonably persecute God’s children.

~ Yu Bing, ChinaAid Special Reporter
###
Behold what manner of love the Father has bestowed on us,
that we should be called children of God!
Therefore the world does not know us,
because it did not know Him…
~ 1 John 3:1 (NKJV)
China Aid exposes abuses in order to stand in solidarity with the persecuted and promote religious freedom, human rights, and rule of law. If you wish to partner with us in helping those persecuted by the Chinese government, please click the button below to make a charitable donation.