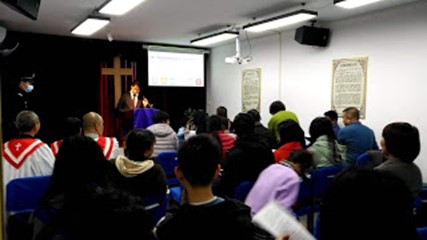 Police raid home of Zhao Weikai, leader in Taiyuan Xuncheng Reformed Church; summoning him and his wife for “proselytism”

Police raid Xuncheng Reformed Church during Sunday service on November 15, 2020.
(Photo: ChinaAid resource)
(Taiyuan [aka also known as Bīng, Jìnyáng], Shanxi Province—May 18, 2021) On Tuesday morning, May 17, local police raided the home of Zhao Weikai, a Christian, and summoned him to their station under the charge of “proselytism” [for providing Christian education in his home]. That same day, police also summoned his wife Li Xin and raided their home. Brother Zhao serves as a leader in Taiyuan Xuncheng Reformed Church. To suppress house churches, Chinese Communist Party (CCP) authorities routinely fabricate charges against pastors, ministers, as well as Christians and believers of other faiths. Those charges include “illegal business operation,” “embezzlement,” “fraud,” “proselytism,” etc.

Shortly after 7 am on May 17, approximately 20 police officers broke into Mr. Zhao’s home. After several officers seized him and his wife, they transported them to the local police station. Other officers still in their home searched the property until 12 pm. Police confiscated numerous books, a computer, a hard drive, and a flash drive, but failed to provide a legal document or list of items they impounded.

After police officials released Ms. Li that evening, she returned home at approximately 7 pm. Authorities ordered Mr. Zhao to serve 15-days administrative detention. Several times in the past, officials “invited” Mr. Zhao to “talk” with them. They ordered him not to provide or host Christian education at his home, however and threatened to arrest him if he did so.

Mr. Zhao refused to compromise his belief and continued to provide Christian education in his home. In the past, Taiyuan Xuncheng Reformed Church refused to join the government-sanctioned Three-self church, and follow the new “regulations of religious affairs.” As a result, CCP authorities have routinely targeted and detained Mr. Zhao and others to persecute the church, a primary mark for their “crackdown” efforts.

For example, on November 15, 2020, police raided Taiyuan Xuncheng Reformed Church during their Sunday worship service and seized Minister An Yankui, his wife, and five other Christians, holding them until 10 pm. In another instance, late night of December 31, 2020, police again seized and detained Minister An and another five Christians at the police station for studying the Holy Bible. Officials released the other Christians at midnight but put Minister An under a 15-day administrative detention order.

CCP authorities forced Li Jie, minister of Xuncheng Church, to move from their location in mid-January, the coldest time of the year. Officials of the Religious Affairs Bureau also brought more than 20 men to threaten those in the service, and raid the church’s school.

In 2018, Pastor Wang Yi initiated the joint-signature campaign “A Joint Statement by Pastors: A Declaration for the Sake of the Christian Faith.” Minister An, one of the first Christian leaders to sign this proclamation, had recently lost his father. He wrote the article, “The Gospel Marching Towards Prison.” Minister An said:

After my father’s funeral, I set out for Taiyuan. Many who care about me tried to persuade me not to do so, fearing I would be arrested. I am grateful for them…their love warms my heart. As God called me to be His servant, however, and Jesus has given me life, I need to obey God’s mighty and glorious calling.

I need to join God’s army.
I need to receive a medal of honor from God.

On May 17, Taiyuan Xuncheng Reformed Church published several prayer request letters, asking Christians to pray for Zhao Weikai and his family:
Answer me when I call to you,
my righteous God.
Give me relief from my distress;
have mercy on me and hear my prayer.
~Psalm 4:1

###
But the end of all things is at hand;
therefore be serious and watchful in your prayers.
~ 1 Peter 4:7 (NKJV)
China Aid exposes abuses in order to stand in solidarity with the persecuted and promote religious freedom, human rights, and rule of law. If you wish to partner with us in helping those persecuted by the Chinese government, please click the button below to make a charitable donation.