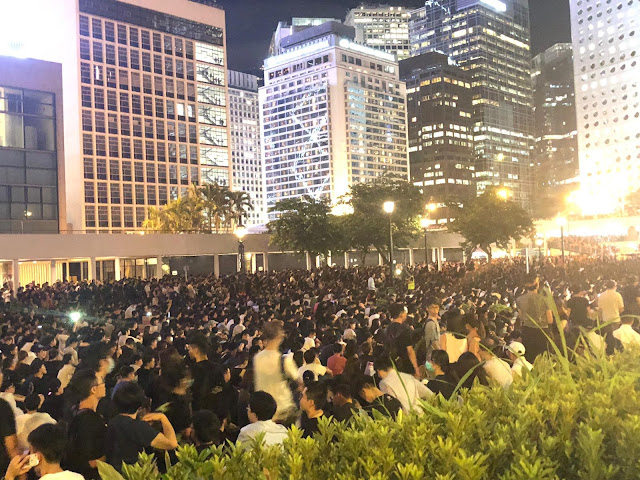 (Hong Kong—Oct. 1, 2019) Today, the same day Beijing paraded 15,000 soldiers through its streets to celebrate the 70th anniversary of the Communist Party’s reign over China, a police officer shot a Hong Kong protester in the chest.

Video of the violent encounter, published by the BBC, shows the protester approaching a masked officer who was already pointing a gun. The protester, wielding a baton-like instrument, pulls his arm back, preparing to strike. The officer then moves his pistol so that it faces the approaching protester and fires a round once the barrel is nearly against the unidentified person’s chest. The protester staggers, then falls.

An anonymous police officer also told The Washington Post that his colleagues were dialoguing about ways to safeguard the officer who shot the man in the chest, and one of the police department’s representatives alleged that the protester was a “huge safety threat,” even though he did not use a device that could easily critically injure the officer.

The BBC identified the wounded protester as a student and said that he called out, “Send me to hospital. My chest is hurting, I need to go to hospital.”

The Post also cited Ken Lui, a Hong Kong Baptist University student, who said he dashed toward a “loud bang” and “saw a man surrounded by police whose hand was bleeding after it was hit by a bullet.” Lui said that witnesses questioned the police as to why they had shot the man.

The protests took place on China’s National Day, which marks seven decades of Communist Party rule. In Beijing, 15,000 military personnel marched through the streets in celebration.

Previous Hong Kong protests opposed an extradition bill, which would have allowed China to relocate people charged with crimes to the mainland for trial. Hong Kong, by law, has its own separate court system, and China is known to routinely target religious practitioners as well as human rights lawyers and activists in the running of its own legal apparatus. By contrast, Hong Kong had been a relative safe haven for such people, protected by laws put in place after the British handover to China. As a result, Hong Kong residents feared the bill would result in the deterioration of their rights and result in many innocent people facing prosecution in China.

While the police in the prior protests did fire tear gas, rubber bullets, bean bag rounds, and water cannons tainted with blue dye to later identify protesters, this is the first time gunfire has been used against the crowds.