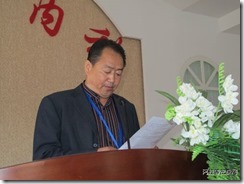 (Alxa Left Banner, Inner Mongolia–May 27, 2013) More than 60 police and other government officials stormed into a Sunday worship service of a house church in Inner Mongolia and violently broke up the meeting using police batons and tear gas, which was later ordered shut down, ChinaAid has learned.

The April 28 action in Alxa (Alashan) Left Banner was led by the United Front Work Department of the Banner’s Communist Party Committee and was jointly undertaken by the local Bureau of Religious Affairs, Public Security Bureau, neighborhood committees and housing development employees.  Of the more than 60 people who stormed into the Alxa Left Banner Christian Church’ s Gospel Hall during its worship service, were more than 30 police officers.

Using police batons and tear gas, they cleared the hall of the worshippers, checked everyone’s identification papers and interrogated more than 10 lay leaders, who were also lectured. Four lay leaders were taken away by the authorities.  More than 40 believers had to attend a "Training Class on the Legal System" on regulations and policies held by the United Front Work Department and the Religious Affairs Bureau.

The Alxa Left Banner Christian Church has a rather long history with more than 50 members, but its numbers have been steadily growing recently.

According to an official report of the Alxa Left Banner government, the action against the house church was jointly undertaken by several government departments in response to the Alxa League (prefecture) government’s work requirement to clean up and rectify house churches.

Below is a translation of this report from the official website of the Alxa Left Banner Government.  The original Chinese report is available here: http://www.alszq.gov.cn/News_View.asp?NewsID=27457 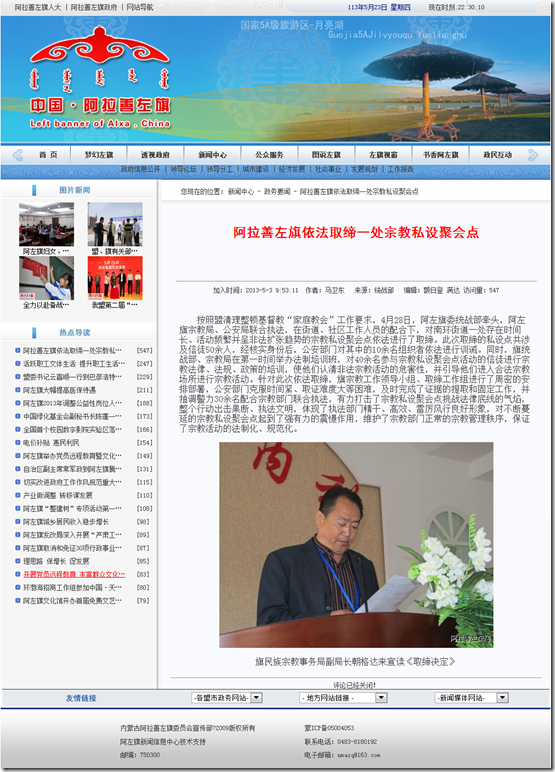 According to the league’s (prefecture’s) work requirement to clean up and rectify Christian "house churches," the United Front Work Department of the Alashan Left Banner Party Committee led a joint law enforcement team on April 28 consisting of Alashan Left Banner Bureau of Religious Affairs and Public Security Bureau, accompanied by neighborhood committees and housing development employees. They banned the privately established religious meeting site located on Southern Ring Road that has existed for a long time and held frequent activities and recently has shown the tendency of illegal expansion. About 50 believers were involved in the privately established meeting site that has been banned. After verifying their identities, the Public Security department lectured about 10 organizers in accordance with the law. In the meantime, the banner’s United Front Work Department and the Bureau of Religious Affairs held a training class as soon as possible and conducted training in law, regulations and policies about religion to more than 40 believers who participated in the meeting at the privately established religious site. Through this, they made clear to the believers the harm of illegal religious activities and guided them into attending religious activities at legal sites for religious activities. In banning this church in accordance with the law, the banner’s leading working group and the banning working group made careful arrangements. The Public Security department overcame the difficulties of having too little time and encountering problems obtaining evidence and completed the tasks of obtaining of evidence in time and successfully deploying more than 30 officers in jointly enforcing the law with the departments in charge of religious affairs. They forcefully dealt a blow to the arrogance of those who challenged the bottom line of the law by privately establishing the religious meeting site. The entire operation was a decisive attack and a civilized law enforcement action that reflected the law enforcement departments’ excellent image of competency, high efficiency and speedy and strict enforcement. This is a strong deterrent to the steadily increasing [occurrences of] privately established religious sites, safeguards the normal order of religious administration and guarantees that religious activities are regulated by the legal system.