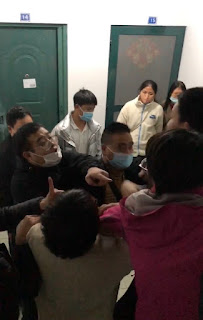 Police take Dai Zhichao and other Christians to the police station

(Chengdu, Sichuan province – November 1, 2022) On the evening of October 29, Early Rain Covenant Church’s Shu Qiong, Xuan Bin, Liu Miao, and Xu Jiali went to visit preacher Dai Zhichao, who has been confined at home for the past month. Plain-clothes police officers stopped the group and harassed them. One of the Christians called the police, and officers came and took them the visiting Christians back to the police station.

Preacher Dai Zhichao has been suffering from 24-hour home confinement since September 29. They prohibited him from leaving his home, even going downstairs to throw away his trash. They left on October 26. Dai then posted on his WeChat Moments:

Thank you, Lord. My home confinement ended today. It’s been almost 1 month. I feel like being released from prison. There were moments of fear, frustration, and disappointment, but I know I have to rely on God. When the hardship deepens, my prayers also deepen. In my prayers, I saw how the country’s desperate need for mercy and the gospel.

However, officers came back on October 27 at 7 AM and stayed there all day. National security agents told Dai that he will be under long-term home confinement.

Preacher Dai Zhichao wanted to go out to pick up his children. When he arrived at the gate of his apartment complex, a man in red clothes stopped him and grabbed his collar, trying to attack him. After he called 110 (China’s 911), a group of people came and verbally abused him. One of them slapped him on his face and tried to take away his cell phone. Later he went back home. In response to his 110 call, several police officers came. Instead of addressing the assault issue, they took his family to the local police station.

At a little after 8 PM, several members of his church came to his home to visit his family, but they were stopped by a group of unknown people on the staircase. Several men dragged Xuan Bin and Shu Qiong downstairs. Dai Zhichao’s wife’s cell phone was taken away. Dai’s family went back home later. Shu Qiong, Liu Miao, Xuan Bin, and Xu Jiali were taken to Honglou Police Station for “education.” Xuan Bin was allowed to leave the police station first because her hand was wounded when they dragged her downstairs. According to the hospital’s diagnosis, her left hand and tailbone were both injured. Shu Qiong, Liu Miao, and Xu Jiali were released at midnight.

Shu Qiong shared the following testimony after she was released:

Thank you, God, and thank you for your prayers. I have been released. They appear scary at first but we were not scared of them so there was nothing they could do to us. Before I left the police station, a police officer asked me to follow his orders and not to look for trouble again. I told him I will not follow his orders. I told him I will visit Dai Zhichao every day as long as he is under home confinement. Many people were watching us in the apartment complex today and they all heard the gospel. Some of them even scolded those bad people. When I saw God’s beautiful work on their conscience, I praised God saying hallelujah!

Dai Zhichao once wrote the following in his devotion journal entitled “Testimony during home confinement-endurance and fight in the gospel.” He wrote:

Actually, what my family experienced is not as severe compared with some other Christians. God brought families into different situations to experience the power of the gospel. We experienced many different situations in recent years to taste the sweetness of God’s grace. I am very willing to think through the process and share with fellow Christians to help them understand the struggle and grace. I can see this is the way God uses me.

Lately I wasn’t able to leave home. I spent my time studying and serving God at home. I always have so many things to do that I don’t have enough time. My wife takes care of all the chores like sending children to school and picking them up, cooking etc. My family life is peaceful now. Our life was disturbed in the first a few days, but we were used to it after that. We still have some struggle in our heart, but God prepares us and let us experience His faithfulness through this.

When I talked to them [the authorities] on the staircase, I used it as an opportunity to share the gospel because my neighbors can hear our conversation. We talked about life, death, eternity, rule of law, and the value of people. Then an elderly lady walked upstairs and scolded them aloud. She said that it’s illegal to confine my personal liberty like that and it’s like the Cultural Revolution. I wanted to comfort her, but I was stopped by them. Another neighbor challenged them, ”Is it right to confine him at home like this?”

I feel guilty my family didn’t attempt to share the gospel like so in the past. Our love and faith were lacking. Actually, when we first moved to this apartment complex, I already knew my neighbors will be involved due to my Christian faith. As predicted, police officers visited me frequently. But I wasn’t able to build much relationship with my neighbors in the past two years. This is how God works. My family disturbed the neighborhood. Their life was disturbed because of us, so they began to talk about us. I hope this creates an opportunity for us the share the gospel with them.

I pray God to give me the strength and wisdom to save some neighbors, community workers, and police officers. Thank you for caring about and praying for my family. I don’t deserve so much love. I pray God to show mercy to this country and give this country a future in the gospel. May God continue to help us

Another deacon of Early Rain Covenant Church was confined for 10 days during the 20th Congress of the Chinese Communist Party. There were always 2-7 people staying outside of his door 24 hours a day. He and his wife were not allowed to leave the apartment complex. Agents followed them whenever they tried to go out. Their life was completely disturbed. His wife told a police officer that they were illegally confined, but he responded, “This is the price for your faith.”