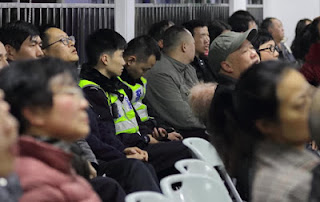 Police threatened Christians in the investigation of Pastor Wang Yi

(Chengdu, Sichuan—Jan. 28, 2019) In the ongoing crackdown on Early Rain Covenant Church, multiple attendees of the church were questioned and threatened by the police regarding the financial situation of Pastor Wang Yi. Some police were direct in that “the purpose is to accuse Wang Yi.”

The church sent a prayer request newsletter on January 24 stating that persecution hasn’t de-escalated even as the Spring Festival approaches. Brothers and sisters of the church continue to be jailed. The newsletter said that police had detained Zhang Xiaohong the night before.

Multiple Christians involved in the crackdown on Early Rain Covenant Church were arrested by authorities on charges of running illegal businesses because of their work helping the church sell and mail bibles. Christians and churches across the country who purchased books and sermon discs from Early Rain Covenant Church via WeChat were harassed and inspected by the police. Some were taken to the police station for questioning.

Early Rain Covenant Church said that multiple brothers and sisters were brought in for questioning. Officers’ questions centered on Pastor Want Yi’s financial situation such as if he had owned a Mercedes-Benz or BMW other than the electric bike he rode.