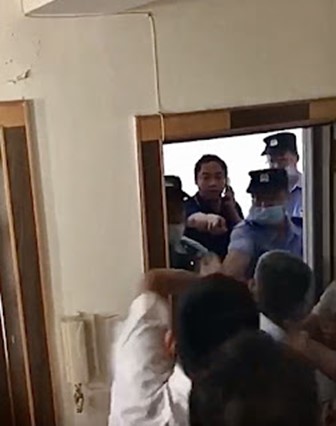 At approximately 11 a.m., while Tashui group members attended ERCC’s online Sunday service, they heard heavy knocks on the door. When they opened the door, several of the more than 10 police officers at the scene stated that someone reported an illegal assembly taking place at this location. “We need to check everyone’s ID,” they said. “We have also notified the religious affairs bureau, and officials from there are on the way.”

When police officers tried to forcibly enter the room, Preacher Dai, the group leader asked, “Will you show us your search warrant?” 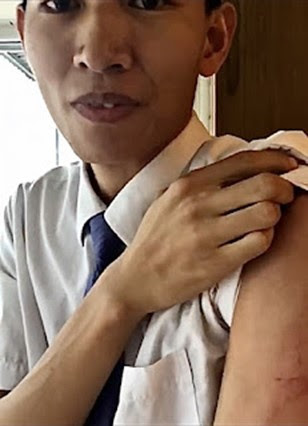 Police officers recorded each attendee’s ID but did not immediately transport them to the police station. While officers watched them, the Tashui group ate their previously planned “love feast.”

After lunch, police officers bused most worship service attendees to the Chenghua District Mengzhiwan Police Station. They did not seize Ma Taibing and his wife, a blind couple, however, and Brother He’s mother, in her 80s. 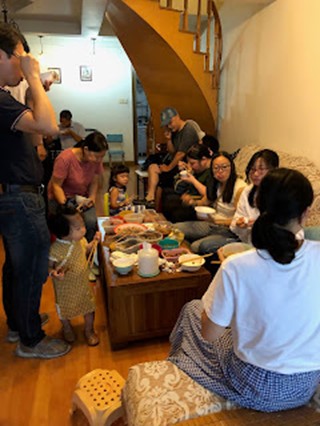 Tashui group members enjoy “love feast” under police officers’ monitoring.
(Photo: ChinaAid resource)
After 4 pm the day of the arrest, authorities transferred some of the Christians to corresponding police stations (according to their address). At around 9 pm, officers also forcibly took Li Chengju, waiting with her husband at the Mengzhuiwan Police Station, inside the station.

As their 11-year-old daughter, not a member of the Tashui group, had attended the Tashui group Sunday service, police had transported her to their station. Police officers consider/called Early Rain Covenant Church a “cult.” Because Sister Li defended her church, officers bound her hands behind her back and forcibly escorted her into the police station. Later, when police released Sister Li, they permitted her to pick up her daughter. When outside the police station, however, Sister Li continued to wait for other arrested Christians to be released.

Police did not release three more Christians until 10:30 pm. They released another four at 11:30 pm. At 1:20 am, as police released Sister Xuan, they ordered her to leave Wuhou District. When she walked out of the police station, she saw Elder Li Yingqiang still waiting for other arrested Christians to come outside. At 2 am, she still had not found a place to stay for the night.

Police released Sister Shu’s family at a little past 2 am. Officers had hit her 8-year-old son’s head with a water bottle. When she protested and argued with them, two police officers brutally kicked her leg with their leather shoes. While simultaneously beating her, they mocked, “Nobody beat you!” Another Christian also experienced violence when police tried to entrap him in an iron cage. When he refused to enter, officers also beat him.

Chengdu ERCC posted a prayer request letter, asking Christian Brothers and Sisters to pray for God to give peace to the arrested adult Christians and children.

Brother Jia, now homeless again, reported that he does not know where he will live next. After the crackdown on December 9, 2018, police expelled him several times. Brother Jia recently heard that police officers traveled to his hometown in Yuzhuang Village, Henan Province to gather information about him.

After the massive crackdown against Early Rain Covenant Church on December 9, 2018, CCP authorities assigned numerous police officers to try to fully eliminate the Church. Official placed many church members under long-term tracking… even if only a small group of three to five people. Christians could not gather in the name of the Church. Nevertheless, the Church still insists on following the Bible’s teaching of “Not forsaking the assembling of ourselves together.” Church members have exerted extra efforts to resume group gatherings. As police officers have intensified persecution on them, however, groups have had to frequently change meeting locations.

Earlier this year, on July 18 at approximately 7 am, police officers had seized the Tashui group’s Brother Hao and Brother Wang before they could enter their group gathering. After receiving their phone calls, other group members moved to their backup location for the Sunday worship service. That day, Preacher Dai preached. After the Sunday service, he, Brother Cui, Brother Xiao, and Brother Wang traveled to the police station to check on Brother Hao’s and Brother Wang’s status. Police also took them into the police station, however, and held them inside for five hours.

In the past, one community leader tried to persuade Preacher Dai to abandon his Christian belief and not attend any more Christian gatherings. After realizing the impossibility of converting Preacher Dai, the frustrated man pounded his desk and screamed:

On one hand, you reap benefits in China, and on the other, you smear our country. Move away as soon as possible. Our Longteng Community does not welcome people like you. We will try every means to force you to move away in one month. We will make that happen.

Another staff member suggested that Preacher Dai move far away because authorities will wage more actions against his family (potentially targeting his children’s education).
Officials released all Christians they had seized that August 22 Sunday except Brother He and Brother Dai. Police officers have continued to hold Brother He in their station, and have also still detained Brother Dai—with the duration of his detention still unknown.
~ Yu Bing, ChinaAid Special Reporter
###
Let us hold fast the confession of our hope
without wavering,
for He who promised is faithful.
~ Hebrews 10:23 (NKJV)
China Aid exposes abuses in order to stand in solidarity with the persecuted and promote religious freedom, human rights, and rule of law. If you wish to partner with us in helping those persecuted by the Chinese government, please click the button below to make a charitable donation.