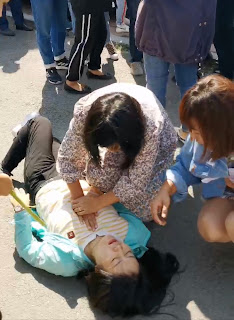 To view videos of the raid and subsequent violence, visit here.

Once the raid began, Pastor Guo Muyun calmly asked people attending the service to go home, and Christians left one after another. Outside the church, chaos ensued as people were taken away, some women were pressed on the ground, and children cried next to them. Police beat Christians while violently enforcing laws, which resulted in two female Christians losing consciousness. Some Christians kneeled and performed first aid to the woman who passed out and Li Guoxiang asked a man to call for emergency medical services.

Documented in the videos taken by church members, some Christians yelled at police, “Don’t beat people! How could police beat folks!” When a woman approached police and confronted them, police held her hand and dragged her to the police vehicle. Another police officer dragged a man by grabbing his collar. One police officer threatened a Christian who was filming using his cell phone.

That afternoon, families of arrested Christians rushed to Weixing Road Police Station, Chaoyang District, Changchun City, making inquiry, and the police station responded, “Investigation is in progress, no details are available, the result should come out in 24 hours.”

A few hours later, Sunshine Reformed Church sent out a prayer request, encouraging brothers and sisters by citing Romans 12:12, “Rejoice in hope, be patient in tribulation, be constant in prayer.”

Pastor Guo Muyun is one of the first signers of the “Joint Statement by Pastors: A Declaration for the Sake of the Christian Faith” penned by Pastor Wang Yi in 2018. He has been summoned by national security officers multiple time because of his refusal to join government-sanctioned Three-Self Churches.