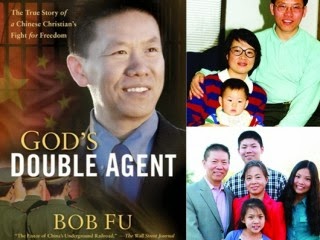 [Author’s note: Anyone who knows me, knows that I am not usually at a loss for words. However, I wish you could hear the audio of the following interview just so that you could hear me repeatedly say, “I am so embarrassed”. Or, “I am so sorry”. After writing extensively on human rights violations, it has become glaringly apparent to me that this administration has willfully placed the issue of human rights at the bottom of its list of priorities. This interview confirms it.]

After escaping from China, Pastor Bob Fu today is recognized as a leading expert on religious freedom and the persecuted church in China. Pastor Fu testifies regularly before the United Nations, U.S. congressional committees, and other influential agencies concerning reports of abuses, especially violations of Chinese citizens’ rights to religious freedom. He is the founder and president of ChinaAid. Under his leadership, ChinaAid has expanded its mission to support legal defense in religious persecution cases, academic research on the rule of law, and ministering to and training of house church leaders in China. Pastor Fu is the author of God’s Double Agent, a harrowing account of his life in China before his escape to America.

LG: Bob, you have testified before Congress, met with world leaders, and have been invited to the White House countless times on behalf of those imprisoned in China for their faith. You have had the unique opportunity to work with the administrations of three presidents: President Clinton, President Bush, and President Obama. Have you witnessed a change in the importance of addressing religious freedom within this administration?
Bob Fu: First of all, as a matter of foreign policy, the issue of religious freedom and human rights is not a partisan issue. The International Religious Freedom Act was passed by a Republican majority Congress and was signed by President Bill Clinton as the first major piece of law on religious freedom in American history since the First Amendment. Our organization, China Aid, is a nonpartisan nonprofit NGO, as well. We work with anyone from any party or non-party who supports religious freedom, human rights, and the rule of law in China.

However, I have certainly seen a shift to an almost passive defeatism because of this administration’s chaotic reading of centuries of foreign policy. Democracy and human rights have been removed as core interests in national security. President Obama made this clear in his speech at the United Nations, when he named energy, oil, and; of course, economic security, as his top priorities. Secretary of State Hillary Clinton made that clear in her first visit to China when she made her infamous remark that human rights issues should not be allowed to interfere with bigger policy issues. [“Our pressing on those [human rights] issues can’t interfere with the global economic crisis, the global climate change crisis, and the security crisis.” –Feb, 2009]

LG: …and President Bush?
Bob Fu: When President Bush took office, he put promoting religious freedom as one of his top priorities in foreign policy. Basically, he told me he went to China and met with two generations of Chinese leaders during his time [as president]. President Bush made a major speech at a major Chinese university in Beijing that was televised live on the importance of religious freedom. Every time President Bush went to China, he tried to make sure he was there on a Sunday, so that he could go to church. President Bush purposefully set that up so that he could use those occasions to tell the Chinese leaders and the Chinese people that it was not a threat to become a Christian, like himself. Condoleezza Rice would do the same thing.

President Bush shared his personal faith with me multiple times. He is very compassionate and committed to his Christian beliefs. So, at anytime, I could just make a phone call and schedule a meeting-anytime. Sometimes, without advance notice, I would make a call and National Security Council would send someone with high ranking to meet with me.

LG: Today, you are “blacklisted” from the White House. You have even had a scheduled invitation rescinded. Why?
Bob Fu: I was there to escort and accompany some Chinese human rights lawyers to meet with senior officials on human rights. I was told the night before the meeting that I was not welcome. They wanted to put me in a coffee shop or somewhere while the meeting took place. We learned the next day that it appeared to be a political decision in the name of the White House legal consul office. President Obama was visiting Asia at the time and that may be the connection. Everyone was so surprised! Our Chinese friends said, “Okay, if you’re not allowed to go…we won’t go”. They chose to boycott that meeting. I asked the Congressional Office to investigate and the White House finally came back and said, “Oh, it was a mistake”. I think President Clinton would not have done this to me. Remember how the Dali Lama was treated when he visited President Obama? They took him through a trash can area!

LG: Have you seen changes within the State Department? It appears that the Ambassador-at-Large for Religious Freedom is nothing more than a figurehead without any real input into policy-making….
Bob Fu: The current ambassador, Suzan Johnson Cook, just resigned. I met with her multiple times and she is very sincere, I could tell, but she was absolutely silenced over there [State Dept.]. Last year, she wanted to go to China and had already made her plans to make her debut visit over there. I was invited to meet with the ambassador in person and with her staff to help prepare her for the trip and all of a sudden -this is the Presidential appointee-her visa was denied by the Chinese government. But, the worst thing that happened, according to a Washington Post report, is that the leaders from the Administration tried to suppress the Ambassador and her staff from talking about it. What kind of signal does the American elected leader want to send to the Chinese dictators?

LG: Why do you think there has been a shift within this administration regarding human rights violations in China?
Bob Fu: First of all, there are the priority issues. Then, there is the China threat. The US administration is so intimidated that they don’t have the courage to stand up-you don’t anger the Chinese; you try to massage the Chinese. Of course, I’m a Christian, so there are some ideological considerations, too. It is very sad in a sense that America is a very diverse society with those fundamental freedoms and protections written in the Constitution. President Obama has even taught Constitution as a lawyer and is a Nobel Peace Prize winner. Yet, China is holding and imprisoning the only other Nobel Peace Prize winner in the world, Liu Xiaobo. President Obama has not spoken one word -not even on behalf of his fellow Nobel Peace laureate.

LG: Is religious persecution in China intensifying?
Bob Fu: Absolutely. The religious persecution has become, not only worse in the past few years but worse in the last few months. There are believers that are being arrested and sentenced up to seven years imprisonment. There is an intense nationwide crackdown right now, being conducted and orchestrated by the state consul of China specifically targeting “illegal Christian activities”. Other religions are not even mentioned in this campaign.

LG: Please discuss the one child policy.
Bob Fu: The American people need to know that this evil forced abortion family planning system, the one child policy, is horrible. Everyday, between 10,000 and 25,000 women are forced to abort their babies. The suicide rate of women in China is the highest in the world. Every woman and every part of her body is under the government’s control, including tracking her trimester-everything. There is also a direct link to this policy and to the explosion of sex trafficking in China.

LG: You will be testifying before Congress in December on behalf of sixteen dissidents imprisoned in China. Who are they?
Bob Fu: The China 16 are the most prominent 16 prisoners of conscience in China. When Obama had a summit with the Chinese president in California, we launched a campaign to publicize their captivity because of their religious beliefs. We have people from all different faiths among these 16–not all are Christians. It is an issue of human rights and religious freedom for all.

LG: What can we do if we are concerned with the human rights violations taking place?
Bob Fu: Over two million Americans visited China in 2011. The Bible says to “visit the least in prison” and Christians need to realize that China has basically “imprisoned Jesus”. If you can’t visit the imprisoned, you can write letters. Above all, we need to pray that the Lord really breaks the darkness of bondage in the Chinese government leaders’ minds. Christians are not threats to society. We help the poor, the children, and the vulnerable. The Chinese government needs to realize that they [Christians] are actually the real stabilizer in society and make the best citizens.

ChinaAid Association (ChinaAid) is an international non-profit Christian human rights organization committed to promoting religious freedom and the rule of law in China. We believe that religious freedom is the first freedom, which lays the foundation for all other basic human rights. By Exposing the Abuses, Encouraging the Abused, and spiritually and legally Equipping the Leaders to defend their faith and freedom, ChinaAid strives to promote religious freedom for all. For more information: https://chinaaid.org/mission/