■ The level of respect for human rights in China has reached its worst state since the deaths in Beijing’s Tiananmen Square in 1989, a new report led by a Christian MP has concluded.

Chairwoman of the Conservative Human Rights Commission, Fiona Bruce also says the UK can do “much more” in helping bring about positive change in China, regarding civil liberties.

In their new document, ‘The Darkest Moment: The Crackdown on Human Rights in China, 2013-16’ the Commission called on the UK government and other governments to raise human rights concerns “at every appropriate opportunity”, both publicly and in private discussions.

The report says there were allegations of harassment, arrest, abduction and imprisonment of more than 300 lawyers and their associates, colleagues and family members in 2015.

The Commission says the UK should use its position as an economic power, Permanent Member of the United Nations Security Council and role in the G8 to exert influence in China. 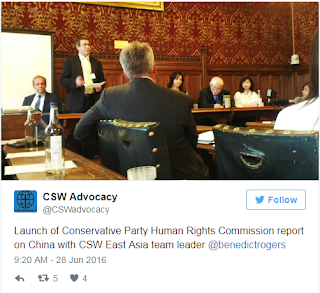 Writing in the foreword, Fiona Bruce, who is also the MP for Congleton, said: “It cannot be in Britain’s interests, or that of the wider world, to witness a lack of respect for human rights or the rule of law by any country with whom we seek to have a meaningful relationship, without challenging this when we become aware of it.”

The report says the rule of law is “essential” to China being a “reliable partner” and British businesses being able to “invest with confidence” in the country.

Fiona Bruce added: “It is a misnomer to believe that it is impossible to pursue engagement and speak out about human rights at the same time. Others have done so and continued to trade and invest.”

Featuring input from Chinese dissidents and foreign experts, including academics, lawyers, journalists and human rights advocates, the report is intended to be a “valuable source” in helping determined the government’s foreign policy.

The Foreign Secretary, Philip Hammond, says in his Preface to the Foreign and Commonwealth Office’s Annual Report on Human Rights and Democracy 2015 human rights has been “mainstreamed …making it a core part of the everyday work of all British diplomats”.