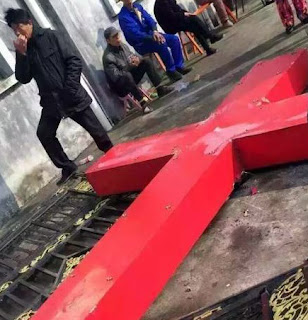 (Shangqiu, Henan—March 12, 2018) Officials in China’s central Henan province attacked a historical Catholic church on Friday, arresting some of the priests.

Without notifying the priests and nuns, authorities investigated the neighborhood around Nantang Catholic Church and abruptly closed it and cut off its electricity. When the priests called the police, they were taken into custody, and their phones were confiscated. The church’s clergy was prohibited from accessing the church, and all four of its crosses were demolished by 8 p.m.

This is the second cross in Henan to be demolished since Sheng’en Church’s cross was destroyed last September.

Nantang Catholic Church is a gothic structure that symbolizes the integration of Chinese and Western cultures. Built by Spanish missionaries in 1924, it served as a Communist Party army base during the civil war against the democratic Kuomintang, which is still a major political party in Taiwan. The war lasted from April 1927-May 1, 1950. During that time, it sheltered individuals who could not fight, sparing the lives of many. As a result, it received state-level protection from the Shangqiu government. It was renovated from 2005-2009.

So far, the Chinese government, under the direction of President Xi Jinping, has demolished churches and crosses in six provinces, including Zhejiang, Jiangxi, Henan, Shanxi, Shaanxi, and Xinjiang.

ChinaAid exposes abuses, such as those suffered by the nuns and priests of Nantang Catholic Church, in order to stand in solidarity with persecuted Christians and promote religious freedom, human rights, and rule of law.