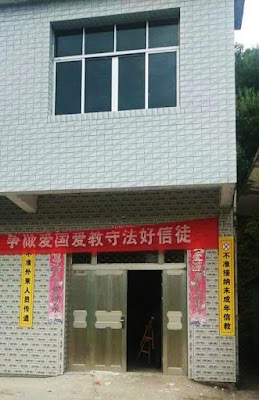 (Cangzhou, Hebei—Aug. 23, 2018) All priests from a parish in China’s northern Hebei province penned a letter to local authorities last week, questioning the ongoing practice of forcing churches to display the national flag and posters about core socialist values, a practice common as the government attempts to unify ideological thought around itself.

The open letter, addressed to the United Work Front Department of the Central Committee of the Communist Party of China and the National Religious Affairs Bureau, maintains that Catholicism is considered a legal religion under Chinese laws, and as such, churches and church property do not belong to the government.

Across China, officials are forcing churches to tear down their crosses and replace them with Chinese flags. Some churches have been made to display postings concerning socialism’s core values, sing nationalistic songs during services, and display images of Chinese President Xi Jinping. The Chinese government does this in an effort to force citizens to view their allegiance to the Communist Party and Xi instead of to their religious beliefs, a process known as “Sinicization.” Christians are encouraged to be Chinese citizens first and followers of God second, allowing the ideas of the Party to trump theology and personal convictions.

Recently, the government has also torn down several Catholic churches, intensifying its attack on religious liberty.

ChinaAid exposes abuses, such as those suffered by Christians in China, in order to stand against persecution and promote religious freedom, human rights, and rule of law.