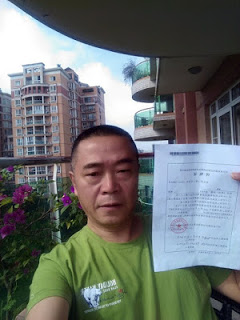 (Chengdu, Sichuan—May 7, 2020) Family members of Huang Qi, a human rights activist who was re-sentenced to prison for leaking state secrets last year, have been blocked from visiting him on the grounds of the epidemic. Huang’s mother, Pu Wenqing, was also denied a phone call with her son by prison officials.

A friend of Huang Qi’s mother, Pu Wenqing, said on Wednesday, April 22 that yesterday, Pu Wenqing called the prison section chief Mr. Yang of Bazhong prison and was told that Huang Qi was serving a sentence in Area Four of the prison, which is for the old, weak and disabled. Due to the epidemic situation, no visit is allowed now. In addition, Pu Wenqing asked for a phone call with his son, but the prison authority said it would have to wait for the leader’s approval, and didn’t tell her about Huang Qi’s health. He is seriously ill and his family is very worried about his condition.

Considering Pu is over 80 years old and in poor health, she should be allowed to talk on the phone with her son. After the epidemic is over, visitation should also be permitted.

On July 29, 2019, Huang Qi was sentenced by the Mianyang Intermediate Court to 12 years for intentionally disclosing state secrets and illegally providing state secrets abroad, with four years of deprivation of political rights. He was held in detention for more than two years before being sentenced, during which he was tortured and forced to confess.

Before the latest arrest, Huang Qi, who set up the website “6.4 net” in 1999, has been jailed two times for his speech. In May 2003, he was sentenced by the Chengdu Intermediate Court for five years for inciting subversion of the state power. He was also sentenced by the Wuhou District Court of Chengdu City for three years for the crime of “illegally holding state secrets” in November 2009.