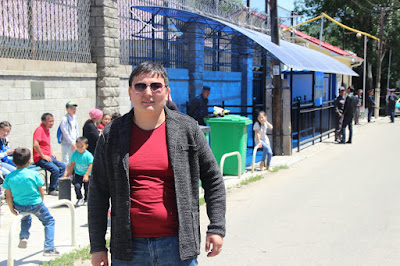 (Urumqi, Xinjiang—July 7, 2018) More details are emerging as Xinjiang continues its efforts to eradicate ethnic minority Muslims and monitor the aspects of their daily lives.

Using aliases to shield their identities, a woman named Alitenggul told ChinaAid that her sister, Paqigul, who was arbitrarily detained in a so-called re-education center, “is experiencing a mental breakdown. In prison, she had to stay on duty for two hours each night, standing next to the wall. The guards forced the Uyghur inmates to kick her head if she refused to comply. She was afraid. She stood up immediately as soon as someone kicked her head. Now, she still wakes and stands up during night. We asked her why, and she answered us that she was on duty. She was forced to take medication and receive vaccinations in prison … Her hair fell out. She is not my old sister anymore. (The government) is so cruel, so cruel.”

Alitenggul added, “My sister is not allowed to go to supermarkets. She can’t even go to the small shops. The alarm rings as she swipes her ID card, and the guards will block her. Now, the family members have to stay with her during the night, because the police break in each night to search her house, suspecting her of hiding guns. The police search the house once a day. Her child raises his hands above his head out of fear. Every time they see a police on the street, the kid says: ‘Mom, put your hands up. The police are here.’ My sister then put her hands up. It hurts me so much. I want to let the entire world know that there are no so-called education centers in Xinjiang. What we have here are prisons.”

ChinaAid also learned that the re-education center told Paqigul not to reveal what went on behind their walls and threatened to arrest her family if she told the truth.

These re-education centers have spread quickly throughout Xinjiang and target ethnic minorities who are predominantly Muslim. There, they are forced to learn Chinese and tortured in an attempt to force them to align their beliefs with the Communist Party. Authorities send them to these centers arbitrarily, for infractions as minor as visiting relatives abroad.

For instance, the Erdaoqiao District and the Grand Bazaar in Urumqi, once famous for selling ethnic minority souvenirs and clothes, has been nearly empty since last year, and Paqigul saw many of the vendors in the re-education centers.

“The police used the excuse that they had been to Turkey years ago,” Alitenggul said. “ The government found stamps of the Customs and Border Protection of Turkey on their passports. The prisoners cried out in the detention center, ‘It’s so unfair that the government treated us like this.’ The gates of Erdaoqiao and the Grand Bazaar are now closed.”

Paqigul also saw two Uyghur news anchors in the re-education centers. Both of their previously black hair had turned white from torture.

Police arrested another young woman for viewing pictures of Turkish movie stars online. She was allowed to call her parents, and her mother, according to Alitenggul, said, “‘Daughter, try your best to learn Chinese. Mom will buy good food for you and bring you to travel after you get out.’ The girl began to cry. The prison guards cut off the phone call immediately and punched the Uyghur girl on the nose. The girl fell down, and her nose began to bleed. The guards beat her so brutally that she could not eat anything. After being carried to her cell, she lay down for five or six days. It’s so cruel.”

In addition, Xinjiang authorities attempt to force Muslims to forsake their religious beliefs, forbidding them from reciting the Qur’an or even speaking in their own language. Since Uyghur women regard their hair as sacred, prison guards seek to catch a woman scratching her head—even going so far as to install cameras in bathrooms—and if she does, they say that her hair is too dirty and shave it off to humiliate her. Once, a 70 year-old Uyghur inmate scratched her scalp, and the guards shaved it off as she begged, “You are the same age as my child. Can you please leave some hair? Please stop shaving after the hair reaches my chest … It’s more painful than asking me to die,” but the guards refused to listen.

However, these re-education centers target people regardless of their religious beliefs. Helatti Shamarkhan, a former inmate, said that authorities separated the 5,700 prisoners in the re-education center he was held in into three categories: people with religious beliefs, including Christians, people who have traveled abroad, and people who did not comply with government orders. As a punishment, the prison authorities would handcuff the prisoners and make them wear 44 pounds of armor for 3-12 hours a day. The prisoners are only permitted to drink water and eat steamed buns, cold soup, and vegetables.

When Shamarkhan returned to his home, he discovered that most of the men in his village had been taken to the re-education camps, and his relatives had begun to converse in Chinese instead of their native tongue. He also witnessed Chinese guards forcibly vaccinating arrested people and making them take medication. Despite his experiences, the police told him he would be killed if he told the truth.