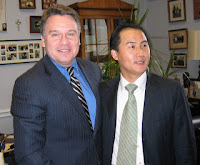 (Tianjin—April 28, 2017) During a secretive trial in China’s northern Tianjin municipality, the Communist Party convicted a renowned Christian human rights lawyer of “subversion of state power” today and attempted to bait his wife into captivity.

After nearly two years of arbitrary imprisonment, a Chinese court ruled that human rights attorney Li Heping was guilty of “subversion of state power” on April 28 and sentenced him to three years in prison with a four-year suspension and deprived him of political rights for four years. This means he is expected to be released home but could be re-arrested if the government deems in violation of terms. However, the Communist Party will often re-arrest individuals serving suspended sentences for arbitrary infringements, such as accepting interviews with foreign media. According to ChinaAid founder and president Bob Fu, Li could face more than five years of close government monitoring.

Additionally, Li was coerced by the government to contact his wife, Wang Qiaoling, and encourage her to travel to Tianjin to collect him so that she could be apprehended once she arrived. Wang informed Li that she feared losing her freedom and told him that if he had truly been released he should come Beijing, where they live. Li said that he understood, and the call was disconnected.

At time of writing, officials have not released Li.

Li was initially taken from his home on July 10, 2015, during a nationwide roundup of human rights lawyers colloquially termed the “709 case” as the raids began on July 9 or 7/09. During the first six months of his imprisonment, he was tortured using various methods, including electric batons and fainted several times.

ChinaAid exposes abuses such as those suffered by Li Heping and his family in order to stand in solidarity with persecuted Christians and promote religious freedom, human rights, and rule of law.