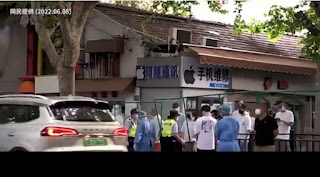 Protests and resistance after more lockdowns in Shanghai

(Shanghai, China—June 9, 2022) On June 7, a neighborhood located near Changle Road, Shanghai was forced to lockdown again just a week after the two-month quarantine, which caused many young people to protest on the streets. Leaders from relevant departments communicated with residents’ representatives, and residents believed that the sudden lockdown was baseless. Police Department dispatched officers to the site and arrested protesters, which resulted in outrage and a brawl between police and residents.

Protestors questioned the police, with one person shouting “Freedom, equity, democracy, rule of law.” An altercation broke out after many of them flipped off the police. Officers arrested two residents, giving one a 10-day detention. Two reporters also went missing after the scuffle.

One senior said, “It would be hopeless if nobody spoke up. A prison can hold ten thousand people, but it can’t hold a million.”

Shanghai health officials implemented a stricter lockdown on June 7 for neighborhoods and districts. Changle Road and four streets in its vicinity were included. Many citizens feel devastated and believe that the entire city will be locked down again.