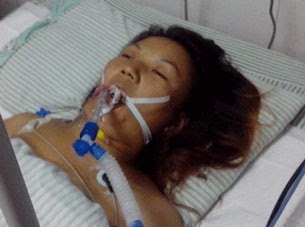 Relatives of a woman in the eastern province of Jiangsu who died in a traffic accident involving a local Communist Party official last week gathered outside government offices on Tuesday in protest at her death and the injury of a second local resident.

Zhang Xiuhong, 31, died five days after being hit by a car driven by Zhou Baojiang, a deputy to the Fengshanxiang People’s Congress local parliament, and local officials had tried to hush up the accident, her sister told RFA’s Cantonese service.

On Tuesday, more than 20 relatives, including Zhang’s three-year-old and five-year-old children, were placed under criminal detention after they arrived to protest outside the Sihong county government offices, she said.

“We have been detained, they say, for disturbing public order,” Zhang’s sister said. “More than 20 of us were dragged away against our will.”

She said police were accusing her of “organizing” the protest after she posted information online about it.

A 51-year-old woman, Liu Cuiying, underwent surgery to her leg after being injured in the same accident that killed Zhang, her husband said.

Liu’s husband, who gave only his surname He, said he had been told that Zhou was currently being held under criminal detention for “causing a traffic accident,” and that a police investigation was under way.

“We went [to the county government today] to talk to the Party secretary, but he was avoiding us,” He said. “We don’t know whether Zhou Baojiang has really been detained or not. Who can say?”

Hidden by traffic police
He said witnesses at the scene of the accident said Zhou had been driving in a highly erratic manner just before he plowed into Zhang and Liu, and that he was clearly drunk at the time.

“The traffic police hid him. And who can test him for alcohol [in his bloodstream] the next day?” he said.

An official who answered the phone at the Fengshanxiang government offices confirmed that an investigation was under way.

“This case is currently under investigation, and we at the village government don’t know the details,” the official said. “Only the agencies investigating it do.”

The accident took place last Thursday afternoon, while Zhang and Liu were riding along on electric bikes.

Zhang had saved her children, who were also aboard her bike, by pushing them out of the path of Zhou’s car and putting herself in their place, family members said on Tuesday.

Zhou was escorted away by officials after he crashed the car into a large tree after hitting Zhang and Liu, reducing it to a pile of wreckage. No ambulance was called for the two women.

Eyewitnesses told the family they had seen the village Party secretary driving past the scene without stopping or calling an ambulance. They said bystanders had managed to locate Liu’s family, who took her to hospital, but that Zhang was left without medical attention, bleeding profusely, at the side of the road.

Zhang never regained consciousness after she was eventually taken to a nearby hospital, they said, adding that they had been told to leave by officials after seeking out Zhou, who they believed to be hiding up in the Fengshanxiang government offices.

Growing public anger
Zhang’s death is the latest in a string of fatal incidents involving powerful figures connected to the ruling Communist Party, many of whom have gone unpunished, and comes amid growing public anger over the behavior of officials and their close relatives.

In September, a court in Beijing handed a 10-year jail term to the son of two high-ranking People’s Liberation Army (PLA) singers for taking part in the gang rape of an 18-year-old woman, in which four other men were also accused.

In October 2012, the chief of police in the northern city of Taiyuan came under fire amid allegations by a whistle-blowing blogger that his son beat up a traffic cop in front of onlookers, and that local authorities stopped the news from getting out.

And a court in northern Hebei province sentenced the son of a high-ranking police officer involved in a hit-and-run road accident to six years in prison in January 2011, in spite of calls for a much harsher punishment after he caused the death of a female student.

Li Qiming’s case brought him nationwide notoriety because of his defiant outburst to officials and angry witnesses to the incident: “Go ahead, sue me. My father is Li Gang!” he reportedly told them.

Reported by Wen Yuqing for RFA’s Cantonese Service. Translated and written in English by Luisetta Mudie.