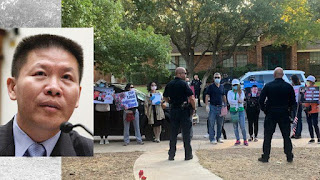 (Midland, Texas– Oct. 22, 2020) For more than two weeks, “protesters” have harassed human rights activist Reverend Bob Fu in a way strikingly similar to the way individuals Chinese Communist Party (CCP) police hire, besiege, and harass democracy and rights activists and others dissatisfied with the rule of the CCP. As agitators have congregated daily in front of the home of Reverend Fu, trying to discredit him, China Aid, and his work, however, residents of Midland have gathered to hold prayer meetings.

On October 15, more than 100 Midland pastors and citizens gathered at Midland’s Horseshoe Arena Amphitheater to launch the #weareBOBFU rally to show support for Reverend Fu, founder of China Aid, and his advocacy of religious freedom. During the rally, clergy from the American Clergy Union delivered speeches supporting Pastor Bob Fu’s fight for religious freedom in China. Randel Everett, a former pastor of the First Baptist Church in Midland, shared his understanding of Reverend Fu and called on the United States to defend religious freedom. 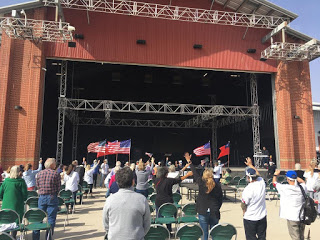 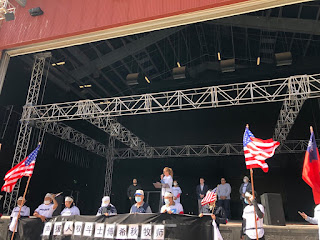 More than 20 Chinese supporters from New York, Virginia, California, and other locations also attended the rally. Waving the flags of the United States and the Republic of China, they proclaimed their stance with Reverend Fu. Protestors did not appear at the amphitheater. 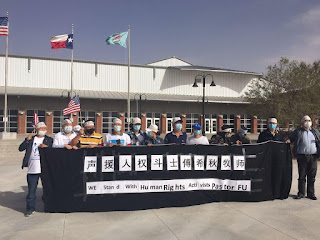 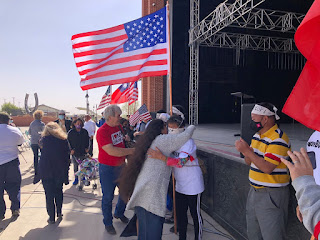 At the end of the #weareBOBFU Rally. rally.
(Photo: China Aid)

The ongoing demonstrations by “protesters” in front of Reverend Fu’s house has been linked to Guo Wengui, a wealthy Chinese businessman, currently in the US on a tourist visa. Guo also goes by the name of “Miles Kwok.” Some Communist Party members may be disguised as fans of Guo.

Recently, Guo, who has reportedly been targeting Reverend Fu since January, published a message on YouTube calling on his followers to “eliminate” Fu. Later, groups of “protesters” started to regularly appear at Reverend Fu’s house.

Following the #weareBOB FU event, Patrick Payton, mayor of Midland, held a press conference regarding the harassment by Guo’s followers in Midland.

The FBI is investigating Guo and his organization…. [Protestors] were hired with money by Guo Wengui, his partners, and the Communist Party. They are trained to know what to say and what not to say. Law enforcement officials take every means to stop these people who are demonstrating.

To try to build his case against Reverend Fu, Guo downloaded a copy of his employee card for teaching English at the Beijing Party School from the Internet, [trying] …to stigmatize him as a spy of the Communist Party. Reverend Fu, however, has frequently mentioned this work experience in his testimony. This experience became one of the reasons why he left China.

The CCP has targeted Reverend FU and Heidi, his wife, in the past. In 1989, after Chinese soldiers killed innocent students, they became Christians. After getting a double degree at Renmin University, Fu Xiqiu (Fu) thought he could work within the framework of the government and share the gospel. During the day, he taught English to future Communist successors, and at night he trained servants for the family [house] church—the Christian church that refuses to register with the government. As a result, the CCP sentenced Fu Xiqiu and Heidi to prison.

Liu Fenggang, a pastor of the Chinese family church, living in Canada, quoted noted one informed individual to say: Fu Xiqiu [Reverend Fu] was interrogated by the police when he was studying in Renmin University. “Once, Fu Xiqiu was arrested by the police at Haidian police station when he handed out Gospel leaflets in the church on Christmas day. [Church staff stepped in to help secure his release].”

Pastor Hua Huiqi, a colleague of Reverend Fu, said that when Fu served as head of a Bible Training School in Beijing, police searched his home and arrested him. “American evangelical teachers immediately launched a rescue operation.”

While Reverend Fu served as a leader of a Bible School and organized training in Beijing, CCP arrested him and Heidi, imprisoning them in the Beijing Jiaomen Detention Center for two months.

After Heidi gave birth to their first child, while eating at McDonald’s, a few days before the handover of power in Hong Kong, Peter Jennings of ABC News interviews her and Reverend Fu. When Jennings asked him about his views on the impending transformation of Hong Kong, Fu replied, “In fact, I am a religious dissident in China. Unless the US government acts on our behalf, my family will surely be arrested again for our Christian faith. The handover countdown is the countdown to our imprisonment. Please stand up for religious freedom.” Afterward, with the help of Christian friends, Reverend Fu and his family successfully left Hong Kong for the United States to begin a new life.

Reverend Fu’s current challenging situation reminds us that the CCP tries to silence dissidents, even if they live in Midland, Texas.

Patched into the #weareBOBFU rally by phone, Reverend Fu expressed gratitude to those who have covered him and his family with prayer. He encouraged listeners, “We need to wake up. Let’s not take freedom for granted.” He called on “the United States to defend religious freedom. Let freedom echo from all directions….”

After assessing Guo’s threats against Reverend Fu and his family and determining them to be “real” and serious, local law officials and the Federal Bureau of Investigation have relocated them to a safe house.