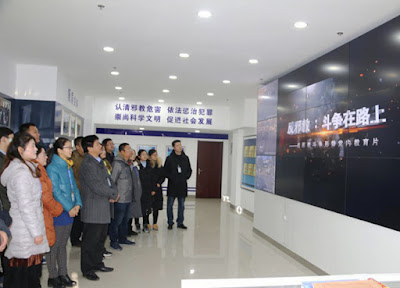 All universities in Qingdao, Shandong, launched an investigation of teachers and students who do not currently hold Communist Party membership recently, and teachers and civil servants who are not members of the Party were prohibited from believing in a religion. Authorities also began investigating and recording information on house churches, focusing on registering every person who attends Sunday services and collecting their phone numbers, addresses, and the information on their ID cards. Some of them even took videos.

“The purpose remains unknown,” an anonymous Christian said. “We’ll have to wait and see what they are going to do next. We guess that the government will take action against the believers, probably pressuring their employers or obstructing their businesses.”

However, government crackdowns are not just limited to local regions. In February, China’s Ministry of Education issued a notice that demanded the education departments pay attention to the safety of elementary and middle school students by “paying attention to the moral education of the students and political education of the faculty members” in order to fight “religions from infiltrating the education system.” It also asked schools to undergo training to “guard against religious infiltration.”

During an orientation for students beginning their studies in 2018, Yangtze University’s College of Arts and Communication maintained that students should “guard against illegal preaching and the corrosion of harmful cultures, establish correct worldviews, life outlooks, and values, and prevent religious infiltration.” The university also asked that its students “not participate in the so-called house churches and private Bible study sessions, or accept funds from unknown organizations.”

“House churches” refer to China’s network of unregistered churches. Even though the government requires all religious organizations to register and receive monitoring from the Communist Party, many house churches elect not to do so in order to practice their faith without censorship. This makes them a target, and officials often persecute them.

On Feb. 28, the Beita District Administration of Education and Technology—located in Shaoyang, Hunan—released a statement titled “The Plans for Establishing a Secure and Civilized Campus,” noting that schools should “guard against evil cults and illegal religions in order to maintain stability.” It also required schools, including kindergartens, to teach students materialism and atheism, organize exhibitions, and make students and faculty members watch movies in order to teach them Party-approved morals. The notice warned that “no religious activities are allowed on campus.”

Similarly, Nanjing Medical University in Jiangsu recently wrote in the fourth section of a report that the current system to prevent religious belief is flawed, and the school should “further reorganize the administration of religious activities on the campus … The school should organize a leadership group that focuses on ethnic and religious affairs, strengthening control over ethnic and religious work. The school should also enlarge the range of patrol in order to detect the traces of illegal religious infiltration. It should include the prevention of religious infiltration as a part of the campus security assessment and clarify the responsibilities (of employees).”

At the end of 2017, Guangxi Normal University initiated a campaign that focused on religious activity administration, forbidding evangelism on campus, and prohibiting all religious forms of religious activity. For pre-existent on-campus activities, the school’s security department claimed it would take actions and use effective measures.

ChinaAid exposes abuses, such as those suffered by Christians across China, in order to stand in solidarity with the persecuted church and promote religious freedom, human rights, and rule of law.