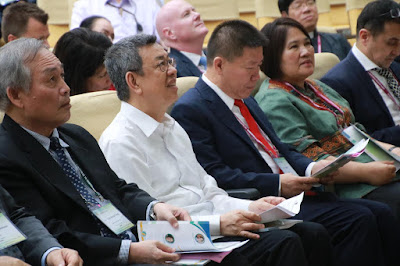 (Hsinchu, Taiwan—June 3, 2019) Participants in the Taiwan International Religious Freedom Forum, a gathering of world leaders to protect the right to religious belief worldwide, penned a declaration on the ongoing persecution of Uyghur Muslims in China’s northwestern Xinjiang region on Friday.
The Forum, co-hosted by ChinaAid and a number of other prominent proponents of human rights, took place from May 31-June 1 and addressed a variety of religious freedom concerns, including those faced by China’s Uyghur population.
The full text of the declaration is included below. Further reporting of the events of the Forum will follow.
—
Taiwan International Religious Freedom Forum

Declaration on the Persecution of the Uyghurs

Whereas the Uyghur people face an existential crisis because of the current massive campaign of destruction and extermination of their ethno-religious identity conducted by the government of China.

Whereas the European Parliament, several UN Special Rapporteurs, the U.S. Commission on International Religious Freedom, the U.S. Department of State, and the U.S. Congressional-Executive Commission on China have issued findings raising alarms about the severe abuse of the Uyghur people’s right to freedom of religious freedom or belief, and other grave violations of Uyghurs’ human rights.

Whereas human rights organizations, such as Human Rights Watch, Amnesty International and the Uyghur Human Rights Project, report a wide range of restrictions placed on Uyghurs’ practice of Islam, including denial to freely undertake Hajj, prohibition of teaching religion to children, forced violation of Halal practices, and limits imposed on observance of Ramadan, in addition to systematic suppression of Uyghur culture, history and language.

Whereas the Chinese government has demolished thousands of Uyghur mosques, such as the mosque in Keriya; shrines, such as Imam Asim; and unique examples of Uyghur Islamic architecture, such as the Khanlik Madrasa, across the Uyghur homeland.

Whereas credible sources estimate that 1.5 to 3 million Uyghurs have been interned in camps since 2017 for arbitrary reasons, including belief in religion, and subjected to an intense program of forced indoctrination to deny their faith and ethnic identity.

Whereas Uyghurs from all classes of society have been swept into the camps including farmers, college professors, wealthy businessmen, musicians, and housewives. Old and young, men and women, from every Uyghur village and city, have been taken and no one is safe.

Whereas the Uyghur Human Rights Project has documented the secret indefinite detention of hundreds of intellectuals, including professors, journalists, artists, poets, musicians, and others – including 435 known to be taken away, sentenced, or disappeared as of May 2019.

Whereas the Chinese Communist Party is implementing a nationwide campaign of control and persecution, including the “Sinification of Religion,” affecting religious believers of all faiths and identities, including Tibetan Buddhists, Christians, Falun Gong practitioners, Hui Muslims, Turkic peoples including Uyghurs, Kazakhs, Kyrgyz, and others.

Whereas accounts have been received from survivors of the camps that prisoners have been subjected to intrusive unexplained medical tests; 100% of Uyghurs were forcibly required to give blood and DNA samples in 2017; and the independent China Tribunal’s Interim Judgement issued December 10, 2018 found that “it is beyond doubt … that forced harvesting of organs has happened on a substantial scale by state-supported or approved organizations and individuals,” raising the concern that the government may be implementing a large-scale program of organ procurement from Uyghur prisoners of conscience, causing their deaths as a result.

Thus, the Forum participants declare that silence in the face of mass atrocities is a green light for continued crimes, and inaction is not a neutral stance. Allowing international norms to be violated with impunity by one government is to weaken those norms and encourage violations by other governments.

Further declare a commitment to highlight and condemn the abuse of religious freedom experienced by the Uyghur people, and to call on governments in the Asia-Pacific region to publicly call on the Chinese government close the camps.

Further declare strong support for the establishment of an inter-group in the European Parliament to address the severe suppression of freedom of religion suffered by the Uyghur, Tibetan, Chinese, and other peoples under the rule of the Chinese Communist Party.

Further declare appreciation and support for the Statement by Concerned Scholars on China’s Mass Detention of Turkic Minorities, and urge scholars throughout the world to join the 700-plus signatories.

And thus, the Forum participants call upon private companies to end all sales and collaboration with programs of surveillance, racial profiling, religious persecution, and mass detention in the Uyghur Region; call upon governments to impose export restrictions and sanctions on such transfers or cooperation; and call upon pension funds and charitable foundations to divest their holdings from any company connected to the Uyghur repression.

Further call upon universities and researchers to speak forthrightly about religious persecution and the mass internment of the Uyghur people, and to suspend cooperation with the PRC Ministry of Education, as long as Uyghur professors, educators, and students are held in indefinite secret detention on the basis of their ethno-religious identity.

Further call upon international scholars and students not to participate in academic exchanges, conferences, and visits involving higher-education officials from China until the camps are closed and persecuted intellectuals are reunited with the families.

Further call upon the World Health Organization (WHO), The Transplantation Society, and the Pontifical Academy of Social Sciences, and the medical profession worldwide, to suspend cooperation with the transplantation field in China, until it can be verifiably established that organs for transplant are obtained through a voluntary donation system, and not by force from prisoners of conscience. This suspension of cooperation should ban transplantation professionals from China participating in international conferences and from publishing in medical journals.

Further call upon governments to grant prompt humanitarian relief, asylum, and assistance with refugee resettlement for all Uyghur refugees and other Uyghurs outside China, such as students, who cannot return home due to the near-certain risk of immediate arbitrary detention.