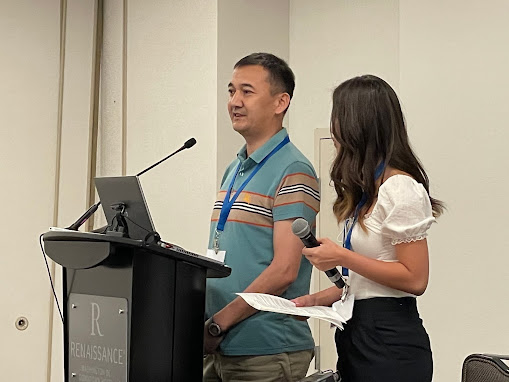 (Washington, D.C.—July 13, 2022) As the 2022 IRF Summit wrapped up, ChinaAid hosted a side event highlighting “Religious Persecution in Xi’s Digital Tyranny.”

China has turned into a nation of digital oppression, with facial recognition cameras, data tracking, and biometrics beginning to be used on all fronts in Xinjiang. The Chinese government’s digital system includes, among other things, extensive data monitoring and analysis, smart regulation, digital governance models, and digital services. The Xi Jinping regime has strengthened its ability to exercise all-round control over the people through digital, making its control over its entire society seamless.

Among the participants was Ovalbek Turdakun (Joseph), a genocide survivor from Xinjiang’s infamous mass internment camps, who testified about his hellish existence under the Chinese regime. He exposed the digital tyranny of the Xi Jinping era.

He publicly testified that more than one million Uyghurs (and other ethnic groups in Xinjiang, including Kazakhs) were detained in Xinjiang’s concentration camps. He was held in a windowless cell with 23 other prisoners, where he was subjected to torture, strapped to a “tiger chair,” physically abused, forced starvation and unspecified medical procedures, administration of unknown drugs, and injections (the officials claimed they were vaccinations), and the tyranny of Hikvision’s electronic monitors.

In October 2018, he was secretly released from the camp after signing a confidentiality agreement. He had to wear a surveillance watch on his wrist that tracked his movements. When the watch’s battery was low, the government immediately knew and would contact his wife to recharge it. The government department closely watched his and his family’s every move. “The gate is equipped with a Hikvision camera, and you must go under it to get out.” He continued, “because of the drugs I took in the camp, it caused my body to be in a fragile state, and I was unable to do labor.”

He and others released from the camp were later forced to attend political studies. Officials threatened them that people like them, considered dangerous to the state, had a record that would affect their next three generations. Officials divided all families into three categories: assured households, dangerous households, and critical households, but did not tell them exactly which category they belonged to.

After this pseudo-release, he remained under house arrest for a year. Three times a day, someone came by to take written records and made him write a report on his thoughts.

Because Ovalbek’s wife Zhyldyz Uraalieva is a citizen of Kyrgyzstan, he was eventually given a passport on the condition that he return within 30 days of leaving the country. He arrived in Kyrgyzstan with his wife and son in July 2019. A month later, Chinese Communist officials urged him to return to Xinjiang via WeChat and Chinese Embassy personnel in Kyrgyzstan. At that point, he discovered that authorities had frozen his bank accounts. They then connected with people in the U.S., arrived in Turkey, and then reached the U.S. with the help of ChinaAid.

Chris Smith, a senior member of the U.S. House of Representatives and a ranking member of the U.S. Congressional-Executive Commission on China (CECC), recognized ChinaAid’s work. He praised ChinaAid’s president, Bob Fu, for being a remarkable man with an extraordinary story of his own, and his efforts to save these people are clear for all to see. Congressman Smith criticized the Chinese government under Xi Jinping for not focusing on human rights but only on economic development and trade. He hopes China will change and become a democratic country with human rights. He said the committee would do more to expose the Chinese authorities’ human rights abuses in the future.

Next year, “we will be doing a lot of hearings and developing a lot of action plans to identify Xi Jinping as a genocide criminal,” he said. He urged President Biden to do more.

During the event’s panel, Washington, D.C.-based ChinaAid staff asked Dr. Scott Flipse of the CECC about the United States’ strategy in regard to the Chinese government’s digital surveillance. He said the Chinese government has been proficient in digitalization, even down to the face recognition system, and many human rights organizations have called for measures to be taken. The Chinese government also uses extensive digital data systems to monitor people at all times and control their every move.

The Chinese policing forces use this data to threaten people. They know their every move, which makes people less likely to go to church or religious events. He replied, “We are already acting and have identified some clues.” Hikvision and another company, Dahua Technology, have now been sanctioned by the U.S. and banned from trading in the U.S. because of security concerns and evidence of their widespread use in Xinjiang concentration camps.