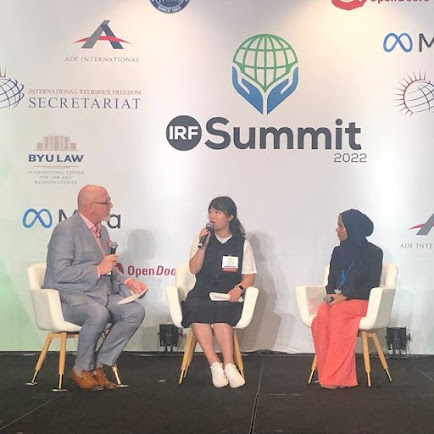 (Washington, D.C.—July 14, 2022) At the 2022 IRF Summit, ChinaAid invited Ren Ruiting, a former member of the Early Rain Covenant Church in Chengdu, Sichuan Province, to give a presentation. Ren gave a three-part testimony on her personal experience of the Chinese government’s persecution of Christian faith communities and individuals.

Due to China’s religious persecution, Ren Ruiting and her family fled to Taiwan in 2019. Due to restrictions imposed by Taiwan’s refugee policy, under the coordination of ChinaAid, her family came to the United States in 2021. They currently reside in Florida.

She recalled during the IRF Summit that she and her family experienced firsthand the Chinese regime’s harassment of their church Early Rain Covenant Church in Chengdu, China’s southwestern province of Sichuan. She witnessed police officers surveilling church members and raiding multiple church gatherings.

The night of December 9, 2018, was a turning point for the church, as her church was ruthlessly suppressed overnight. The police took away about 300 church members for questioning. Some members were also subjected to severe beating. The police kept her family, including herself, under close surveillance, with more than 10 government personnel guarding their home and two police dogs outside their residence. The police angrily threatened her, saying that he would have beaten her up if he weren’t wearing a police uniform today. The government’s propaganda machine identified the church as a “cult,” which led to widespread public condemnation of her church. None of the government’s actions were based on the law.

They eventually decided to flee China for their personal safety.

As soon as the local government in China labels a church as “illegal” or an “illegal congregation,” the church’s active members are listed as targets to be put under observation and even crackdown.

Ruiting revealed that the government recently stopped the wedding of two church members and kept the church elders in their homes, preventing them from attending. This was not an isolated incident.

In a conversation at the summit’s workshop, she said that the circumstance of imprisoned Early Rain’s Pastor Wang Yi was not optimistic. Authorities also implicated Wang Yi’s wife. They banned her from going out to work and cut off communication with the outside world.

Ruiting called on the international community to “speak out, especially for Pastor Wang Yi, whose situation is particularly troubling. I see him as a signal that the bitter winter of Christianity in China began with the persecution of Wang Yi and his church. We can see him as a representative to speak out for Chinese Christians.”

Ren Ruiting cited a long list of persecutions by the authorities in recent years, including the Xunsiding Church in Xiamen, Fujian, and some house churches in Shanxi. Ruiting called on the international community to “not forget them,” even if it’s only through showing support for them on social media platforms, which would go a long way toward improving their situations.

ChinaAid’s founder Bob Fu also emphasized that Early Rain  is not an isolated case, but “the entire country of China is undergoing religious persecution and is being comprehensively suppressed by the Xi Jinping regime.”

The main points of Ren Ruiting’s speech are as stated below:

1. What is your experience in China?

As members of the church, our family was not spared when the church was persecuted. Although the official, subversive persecution began on December 9, 2018, the government’s long-standing harassment of the church, such as the police monitoring us at every meeting; forcing the church to cancel some of its regular activities, were all things that had impacts on our everyday Christian faith.

The peak of the persecution started on December 9, 2018, when many co-workers of the church were arrested that night. About 300 regular congregants were forced to undergo police interrogation with no due process. For 24 hours a day, a dozen people monitored my family and me, a family of six, including our two dogs, at our residence. Even when we went out to walk the dogs and for piano lessons, we were followed and watched closely. The person following me even threatened that he would have beaten me up if he weren’t wearing a uniform today. This incident made me feel very uneasy.

What made us determined to leave China was to protect my brother, who is an adopted child. At that time, the police were spreading rumors inside our community that our family was a cult. In circumstances like this, it was likely they would send the adopted child back to an orphanage – something that had already happened to other families. To protect this child, we decided to flee China.

2. The current situation of Christians in China

The persecution never stops. Last month, a young couple from the church was preparing to get married, and many church members were hoping to attend. Still, the government deemed the wedding an “illegal church gathering” and forced the hotel to break the contract, trying to prevent the wedding from happening. Before and after the wedding, authorities kept the couple and the church elders who attended the wedding at home.

This is not the first time that this has happened. To prevent the gathering of churches, the government disrupts weddings, funerals, and other normal activities.

And the arrests have not stopped. As shown on the screen, more and more church leaders are subjected to horrific arrests and have been charged with different crimes. After being arrested, they are denied their normal legal rights, their health issues are ignored, and they are not allowed to meet with their families. This is very worrisome for us, for example, Pastor Wang Yi and Elder Hao Ming, who are not in good health. Without consistent meetings with their families, I am worried that the government will deliberately torture them and make their health conditions even worse.

In particular, I would like to mention that Wang Yi’s family is still under surveillance, and his wife is not allowed to go out to work freely or to contact others in the church. This is a kind of imprisonment outside of prison.

3. What can Americans do to help Christians in China?

As I was preparing for my speech, my friend suggested that I don’t introduce so many names because there were so many that it would be hard for people to remember.

That is precisely the reality. There are too many persecuted people, and there will be more and more. What I have mentioned is only a very small part of the list, and it was not easy to gather all this information during the preparation process because so many things need help.

After thinking about it for a long time, I still decided to say all the names I know. I ask everyone in attendance to please remember them, and please don’t forget them. I know it is difficult for Americans to remember the names and appearances of Chinese people. But compared to the pain they are going through, it is an easy task for us to remember their names. If you truly want to help them, please remember their names, even if it is just one of them. Pray for him, support him on social media platforms, mention him, and let the Chinese government know that many people are paying attention to this, which would be very helpful to their current situation!

Please speak up, especially for Pastor Wang Yi; he is in a particularly troubling situation. I see him as a sign that the cold winter of Christianity in China began with the persecution of Wang Yi and his church, and we can see him as a representative and a voice for Christians in China.

Time is very limited today, so everyone may be unable to remember every name and detail here. I’ll put them on the ChinaAid website, so please continue to pay attention to these people in prison! Don’t forget them! Thank you.