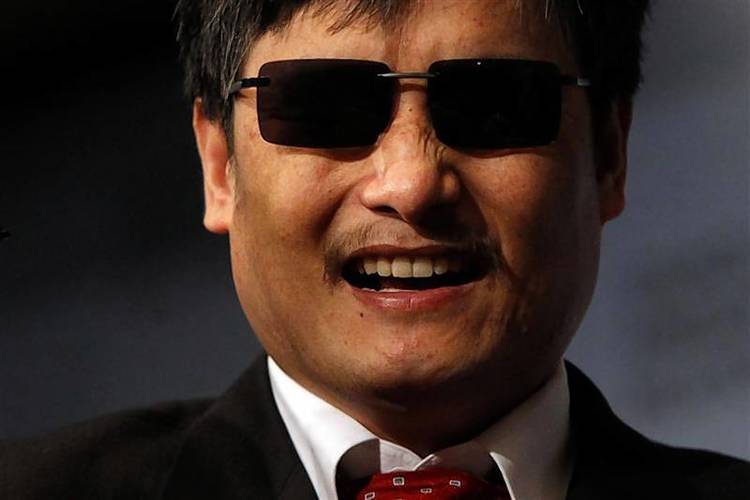 Chen also accused the government of breaking a promise to investigate what he says is the persecution of his family, according to a recorded message posted on YouTube by Texas-based Christian advocacy group ChinaAid, which backs him.

The self-taught legal advocate’s escape from house arrest in April and subsequent refuge in the U.S. Embassy was deeply embarrassing for China, and led to a diplomatic tussle between the two countries.

Chen was allowed to leave China and is studying in New York.

Chen said in the message released over the weekend that if Myanmar’s President Thein Sein was able to release people like Nobel laureate Aung San Suu Kyi, then Xi should be able to release Chinese prisoners of conscience.

“Then Sein’s open mind won him support from Myanmar’s people and recognition from the world. Even Thein Sein can do it, yet Xi Jinping doesn’t. Obviously it’s not that Xi couldn’t do it, but simply that he won’t,” Chen said.

Chen’s nephew, Chen Kegui was given a three year three month jail term last week after being charged with using knives to fend off officials who burst into his home on April 27, the day after they discovered his uncle had escaped from 19 months of house arrest in eastern Shandong province and fled to the U.S. Embassy in Beijing.

“Because I fled the country, government officials have enacted revenge on my nephew Chen Kegui and others. Chen Kegui tried to defend our family, but he was arrested and is still in jail today,” Chen Guangcheng said.

“There is no word that Communist Party rulers are willing to change and do the right thing,” Chen added.

Addressing Xi, he said: “Whether you will follow the call of heaven and the people to carry out reform, or kidnap the government and maintain the power of the Communist Party is a matter of whether China will have the transition in a peaceful way or a violent way”.

The U.S. State Department said it was deeply disturbed by Chen Kegui’s sentence.
But Chinese Foreign Ministry spokesman Hong Lei said the United States had no business interfering in the issue.

“The Chen Kegui case is solely a Chinese domestic matter. China is country with rule of law … The legal rights of this person and his family members have been effectively guaranteed,” Hong told a daily news briefing.

“We are extremely dissatisfied that the relevant country rudely interfered in China’s internal affairs. We most certainly do not accept it.”