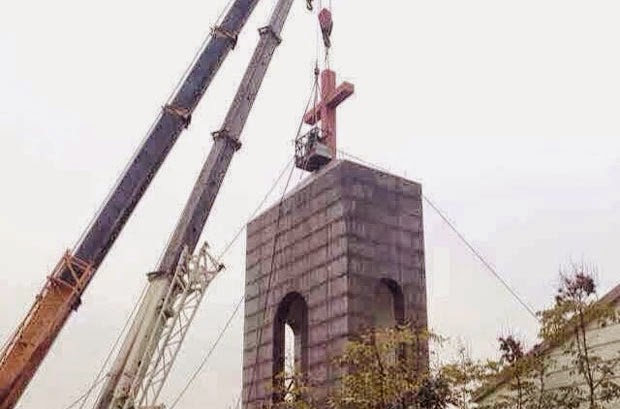 RFA: Chinese Officials Tear Down Another Cross Ahead of Christmas

Authorities in the eastern Chinese province of Zhejiang have torn down a cross from a major Protestant church in the region following clashes with congregants who tried to prevent them, the church’s followers said on Monday.

More than 100 local officials and demolition workers showed up at the church, which is attached to a nursing home in Hangzhou city’s Dingqiao township, sparking clashes on Friday in which at least three people were injured, a nursing home resident who declined to be named told RFA.

“There were a lot of people, some from the government,” she said. “Some of the elderly people saw what they were doing [and tried to stop them] … there was a minor clash.”

“Three of [congregants] are still in hospital, and a few more had medical treatment,” she said. “But we couldn’t stop them in the end.”

An official who answered the phone at the Hangzhou civil affairs bureau declined to comment when contacted by RFA on Monday, saying they didn’t know about the incident.

According to the U.S.-based Christian rights group China Aid, hundreds of Protestant churches in Zhejiang have been targeted for demolition in the past year.

The actions against churches in Zhejiang are all connected to the province’s “Three Rectifications and One Demolition” campaign, which claims to target all illegal structures, the group said in a report on its website.

The campaign calls on local officials to take action to “demolish illegal structures that violate laws and regulations, occupy farmland, affect public safety and major construction, seriously affect urban and rural planning, and those that are located on both sides of main lines of transportation,” it said.

Elsewhere in the province, a resident of Wenzhou city’s Longwan district surnamed Li said the authorities had also recently taken down the cross on the roof of nearby Wuxi village, and appear to be targeting Protestant churches rather than Christians in general.

“The cross on the Wuxi village [Protestant church] has been demolished, but our Catholic church is fine,” Li said. “All the churches targeted for cross demolition are Protestant churches.”

“I don’t understand why the government is doing this.”

‘China’s Jerusalem’
China Aid founder Bob Fu said more than 400 churches have been targeted in Zhejiang, which has a high density of Protestant Christians.

“The government is using illegal building regulations to justify this campaign and to stop Protestant Christianity from spreading too quickly in the region,” Fu told RFA on Monday.

“By tearing down crosses, they are hoping to minimize the influence that Protestant Christianity has on the local population, and to further reduce its number of followers,” he said.

Fu said the main focus of Zhejiang’s church and cross demolition campaign has been the coastal city of Wenzhou, which has been unofficially dubbed “China’s Jerusalem.”

“There are a great many Protestants there, the largest following in the country, so they are using it as a test run for ways to curb the spread of Protestant Christianity,” he said.

He said the government is also intensifying a campaign to jail prominent pastors of the larger churches, often on charges linked to running cults.

“They want to curb missionary work among young people under [the age of] 18, and they are requiring local governments to work with schools and primary schools to spread an atheist message,” he said.

Long-running dispute
Last week, authorities in the central province of Henan demolished the cross of a major Protestant church, walling it up to prevent access by the congregation ahead of its Christmas celebrations.

The church in Henan’s Nanle county is at the heart of a long-running property dispute with local officials that led to the jailing of its pastor Zhang Shaojie in July for 10 years on charges of “fraud” and “gathering a crowd to disrupt public order.”

Zhang’s jailing surprised many observers, as the ruling Chinese Communist Party officially allows Christians to worship in such churches, while unregistered congregations tend to be targeted for official harassment.

Far from being a “house church,” the Nanle church is a long-established and officially sanctioned group, and Zhang is a former president of the government-sanctioned Protestant association and adviser to the county People’s Political Consultative Conference.

Zhang’s family fled to the United States, soon after he was jailed, via an underground railroad of Christians and human rights activists in Southeast Asia.

The Nanle crackdown shows that the government is becoming less and less tolerant of organized religion, even in its state-approved form, rights activists said.

The Chinese authorities had been cracking down on Zhang’s government-approved Nanle church for about a month before his detention in November 2013 following a land dispute that pitted the popular preacher against the county government.

Reported by Gao Shan for RFA’s Mandarin Service, and by Hai Nan for the Cantonese Service. Translated and written in English by Luisetta Mudie.