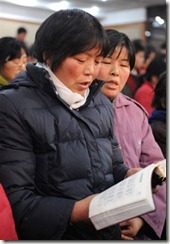 During the Christmas season, Chinese authorities continued to crack down on religious activities in China.  On Sunday, authorities in far northwest China’s region of Xinjiang broke up a gathering of 31 Christians, both Han Chinese and Uyghur, in Shache County, Kashgar. Also, a government-approved Three-Self Patriotic Movement church in Longhua, Hebei province, was shut down because the number of people in attendance exceeded the limit set by the government.  The following is a report by Qiao Long, a special reporter for Radio Free Asia.
Caption: Authorities in Xinjiang prohibited 31 Christians in Xinjiang from meeting.  The photo shows believers arrested locally last year. (photo/reporter Qiao Long)

With the approach of the New Year, Chinese authorities stepped up their suppression of religious activities. During the Christmas season, authorities in Shache County, Kashgar in Xinjiang broke up a gathering of more than 30 Christians, both Han Chinese and Uyghur, on the grounds that it was an “illegal gathering.”  A Han Chinese Christian told this radio station on Thursday, “On Sunday December 26, the Gulebake Town Police Station in Shache County in Kashgar took into custody 20 to 30 people.  At 9 a.m. and at 6 p.m., they released the detainees.  There were 31 people at the gathering.  The exact location of the gathering was down the road from the Party School of the development zone.”
Reporter: Were they Han Chinese or Uyghurs?
Believer:  Han Chinese and Uyghurs both.
Reporter:  On what grounds was the gathering dispersed?
Believer:  He said it was illegal.
Another believer said: “Thirty-one people were celebrating Christmas this month. Several police officers came to tell us to go to the local police station. Cadres from the Bureau of Religious Affairs and from various communities were also told to go there. It was to thank the authorities for giving them face (for not arresting anyone).
In addition to suppressing house churches, the authorities are also very strict toward the government-approved Three-Self churches.  Pastor Zhang Mingxuan, president of Chinese Christian House Church Alliance, said that the authorities are strictly enforcing the number of people allowed in a gathering, which is 15 people or fewer. A Three-Self church in Longhua, Hebei province was banned when its numbers grew to 200 people. He said: “They called today (about) a Three-Self church in Longhua, Hebei.  People from the Bureau of Religious Affairs have sealed up their building and won’t allow them to have large meetings.  Theirs is a Three-Self church. I’ve heard it now has 100 to 200 people. It is a government-sanctioned church.  They got big. So unless you bribe them (the officials), they will make trouble for you. ”
Reporter:  Is there a limit to how many people are allowed?
Zhang Mingxuan: They only allow 15. This is what he said. But they have grown to 100 to 200.
This reporter tried many times to call the pastor of the church in Longhua, but nobody answered the calls.
According to information Wednesday from ChinaAid Association, headquartered in Texas, USA, two house churches in Bengbu, Anhui province and a Three-Self church had planned to hold a joint Christmas celebration one evening for a thousand people, but the police stopped it from happening. In another development, the government cracked down again on a house church led by Zhan Gang in Jiaozhou, Shandong province, during the Christmas season and now the Christians have no place to meet.
This reporter called Pastor Zhan Gang who said: “Everything’s okay now. We have already triumphed; we’ve triumphed by relying on the Lord.  Thank you for your concern.” However, he did not give any details about how exactly things were.
During the Christmas season, authorities also prohibited believers in prison from meeting with fellow Christians. Yang Kai, brother of Yang Lirong, a Christian from Fushan House Church, Linfen, Shanxi province, who is serving a seven-year sentence, told this reporter on Thursday, “We went to see her last month. She was in poor health. We went and found some people (from the prison) and learned that they usually don’t prescribe good medications. Then, we thought we might as well discuss this with them. When we visited her last month, she had improved a little.  They seem to have more strict rules during the Christmas season. Now, they allow us to see her only once a month and other Christians are not allowed to see her at all.”
In September 2009, authorities in Linfen, Shanxi province dispatched riot police and armed police to crack down on the Fushan House Church. They sealed the church building and two months later, sentenced five church leaders to jail terms and sent five others to labor camps, including Wang Xiaoguang, Yang Lirong and her husband, Yang Xuan, Zhang Huamei, and others.
As for the Golden Lampstand Church which was built with funds raised by Christians and which the authorities declared an “illegal structure,” it is still being guarded by the police, who prohibit any Christians from approaching the structure.  Yang Kai said: “As for our meetings, we can still hold small-scale gatherings.  I even went to take a look at the church building. There’s been no change to its exterior; it’s still under guard.  I guess they think it’s better (to maintain the status quo). 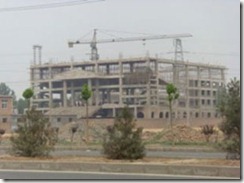 Caption: Golden Lampstand Church was built with funds raised by Christians in Linfen, Shanxi province.  Authorities said it was an illegal structure and post guards around it every day. (Photo/reporter Qiao Long)
In addition, two house church Christians from Chimei Town, Neixiang County in Nanyang, Henan province – Chen Fenming and Qin Gaiying – who were sentenced by the Public Security Bureau to re-education through labor in early May for engaging in “cult activities” are in poor health and difficult circumstances at this time, according to a local Christian who said, “Two people in Henan, a brother and a sister, are still in labor camp.”

And in Beijing, ten days after Fan Yafeng of the Shengshan Church was detained by the Public Security Bureau, authorities are depriving him and his wife of their personal freedom.
Qiao Long, a special reporter for Radio Free Asia, conducted the above interviews and filed this report.
Copyright © 1998-2010 Radio Free Asia. All rights reservedhttp://www.rfa.org/mandarin/yataibaodao/jiao-12302010095438.html