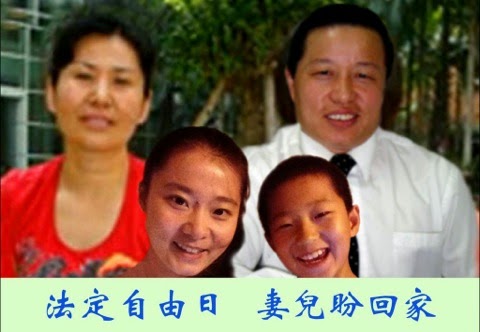 RFA: Lawyer Gao Zhisheng has been released from prison, unable to give any speech during the one-year deprivation of political rights

Translated and edited by China Aid Association
Reporter Zhang Min from Radio Free Asia: interview with Gao Zhisheng’s wife, Geng He, on the morning of Aug. 7, Beijing time [and with Hu Jia, a well-known rights activist, on Aug. 7]

“I asked: ‘Why? I need to confirm with him!’ But the phone was hung up. I called again but was never able to get through; [the phone kept] saying service unavailable.”

Hu Jia: “[Gao’s] elder brother is not worried about being disturbed, but is concerned that the state security police may retaliate against Gao. The state security police have warned Gao that he cannot give any speech during the one-year deprivation of political rights. Gao’s family has confirmed that he has been released as expected. Gao’s elder brother told BBC that he was with Gao, but did not want any media to disturb him.

“I have sent this photo to the relatives of Gao Zhisheng. He will see it, but if anyone can send it to people picking him up, and let him see it at the earliest time on this statutory day of freedom, when his family is expecting him to be home, it would beyond words!” Hu Jia said.