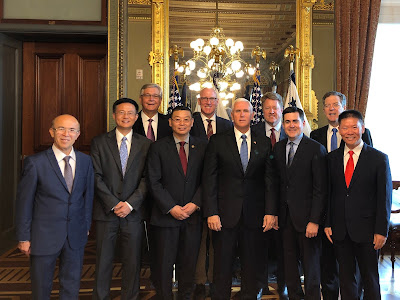 (Washington, D.C.—Aug. 5, 2019) ChinaAid Founder and President Bob Fu and a group of religious freedom advocates met with Vice President Mike Pence and the National Security Council (NSC) at 10:00 a.m. Eastern Time this morning, highlighting persecution in China and asking the Trump Administration to take certain actions regarding the country’s violations of religious freedom and human rights.

The meeting featured three prominent faith communities commonly targeted by the Chinese government: the mostly-Muslim Ugyhurs, represented by Chairman of the Executive Committee of the World Uyghur Congress Omer Kanat; Falun Gong practitioners, represented by the Washington DC Falun Dafa Association spokesperson Jeff Chen, and Christians, represented by Fu. Each representative presented respective summaries of China’s persecution of the people in their communities, spotlighting the core issues of an ongoing Uyghur genocide, the monitoring of Christian churches, and the suppression of Falun Gong adherents. They also named principal members of these communities who have been persecuted.

Fu then asked the Trump Administration to utilize the “Global Magnitsky Human Rights Accountability Act” to sanction key Chinese authorities, including Xinjiang leader Chen Quanguo, for their treatment of Uyghur people. “The Global Magnitsky Human Rights Accountability Act”—named for Russian accountant Sergei Magnitsky, who was tortured in Moscow and later found dead in his prison cell in 2009—allows the U.S. president to withdraw the visa of any person or entity entrenched in deep corruption or, according to Sec. 3, Clause (1) of the Act, “is responsible for extrajudicial killings torture, or other gross violations of human rights.”

In Xinjiang, more than 1 million Uyghur people have been imprisoned in concentration camps for their ethnicity and Muslim faith, with many undergoing starvation and brainwashing. There have also been reports of officials raping prison members, and many have vanished or perished in the complex networks of camps.

Russell Moore, the president of the Ethics & Religious Liberty Commission of the Southern Baptist Convention (ERLC), urged the U.S. government to press China to extend an invitation to the U.S. Commission on International Religious Freedom (USCIRF) and U.S. Ambassador-at-Large for International Religious Freedom Sam Brownback. Moore said this trip should also include unrestricted access to Tibet and Xinjiang, both commonly-censored hotbeds for human rights abuses in China. Previously, members of the international community have been invited to visit Xinjiang but have been restricted in what they are able to see.

Greg Mitchell, the founder of The Mitchell Firm, then encouraged the U.S. government to openly request the release of a number of prisoners held unjustly within China.

The CEO of Open Doors USA, David Curry, concluded the requests to the Administration by asking that the State Department reinstall China’s status as a Country of Particular Concern (CPC), a designation that would highlight China’s abuse of human rights and permit President Trump to impose a wider range of sanctions against the Chinese government.

Moore then opened the floor to Vice President Pence and National Security Advisor John R. Bolton, during which the presented points were further discussed.

To read the White House’s readout of the meeting, please click here.