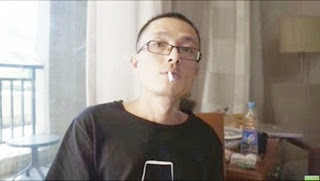 (Dali, Yunnan—April 16, 2020) An appeal regarding the sentence of human rights website founder Lu Yuyu has been rejected.

On April 1, Lu’s lawyer said the Dali Municipal Procuratorate notified him of the rejection, claiming they had investigated the case.

Authorities took Lu into custody in 2016 on a “picking quarrels and provoking trouble charge.” He was tried the following year and given a four-year sentence.

If he wishes to, he may appeal to a higher court, but his lawyer does not yet know whether or not he intends to do so.

During his time in prison, Lu wrote his father, saying he suffered from severe depression and requesting to see a doctor. Lu’s attorney asked the prison to allow him to seek medical care at a hospital, but the request was denied.

The attorney also said Lu’s mental health seems to be improving as he approaches his release, which is set for mid-June. However, a friend expressed concern, saying it is impossible to tell how people are really feeling.

Lu is the founder of “Not News,” a website centered on human rights. It is not uncommon for those in China who advocate for human rights to be jailed.