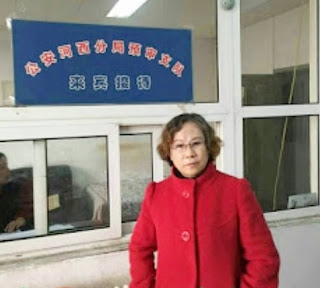 (Shenyang, Liaoning—March 31, 2019) An attorney who filed the case of human rights lawyer Wang Yu when she was arrested as part of a nationwide crackdown on her profession will stand trial on a “provoking troubles” charge on April 9.

The defendant, Li Yuhan, has been in police custody since Oct. 9, 2017, when she was placed under criminal detention on a “provoking troubles” charge. She was arrested on the same charge on Nov. 15, 2017, and in March 2018, authorities introduced a fraud charge and handed her case over to the local procuratorate for investigation. Her pre-trial hearing was held last October. She is being held at a Shenyang detention center, and she was initially maltreated, so she protested by going on a hunger strike.

The judge presiding over the case informed Li’s defense counsel, an attorney surnamed Ma, that her cause would be tried on April 9, but Ma has not received a hard copy notice. Another lawyer will meet with Li at the detention center in order to prepare for the trial. The defense team plans to plead not guilty on her behalf.

Li’s younger brother confirmed her trial date with the judge, and the family has been permitted to sit in on the hearing. He has not seen his sister in more than a year. In addition, he said Lawyer Hu Li met with Li and reported she appeared to be doing fine physically and mentally, given her situation.

Li is in her 60s and began working as a lawyer in Liaoning in 1991. She fled to Beijing to escape persecution and has been working for a law firm there. After China began a massive campaign to sweep up all the human rights attorneys in the country, she filed the case of the prominent arrested lawyer Wang Yu. She suffers from multiple medical conditions, including cardiac arrhythmia, coronary heart disease, unstable angina pectoris, hyperthyroidism, and gastritis. She has also suffered a cerebral ischemic stroke and injured her meniscus tissue.