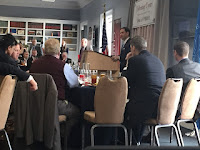 After opening his speech with a celebration of the American freedom to agree with or openly resist governmental power, Rubio compared this situation to that of China, whose flagrant abuse of human rights criminalizes those who disagree with the Communist regime. He raised the cases of two human rights attorneys, Jiang Tianyong and Tang Jingling, honoring the requests of their wives, whom he met last week as part of a China Aid delegation.

Jin Bianling, Jiang’s wife, last heard from her husband on the evening of Nov. 21, 2016, as he prepared to board a train back to Beijing after visiting the family of Xie Yang, an incarcerated human rights lawyer. When the train arrived the next morning, Jiang was not aboard, and officials later announced that he was being held at an undisclosed location. To this day, Jiang has not been allowed visits from his family or access to a lawyer.

Tang entered police custody on suspicion of “inciting subversion of state power” in the weeks leading up to the 25th anniversary of the Tiananmen Square Massacre, which China still heavily censors. In January 2016, he and two other prisoners of conscience were tried, and Tang was sentenced to five years in prison.

Quoting Tang, Rubio said, “Inside the grand edifice of the court, we can see stately and ornate furnishings and decorations, and we can see the government employees in dignified attire. But we cannot see the law and we can definitely not see justice.”

Rubio concluded his address by urging government officials to take up the causes of those who suffer from persecution in China.

His full speech can be watched here.

China Aid works with officials such as Rubio in order to stand in solidarity with persecuted Christians and promote religious freedom, human rights, and rule of law.