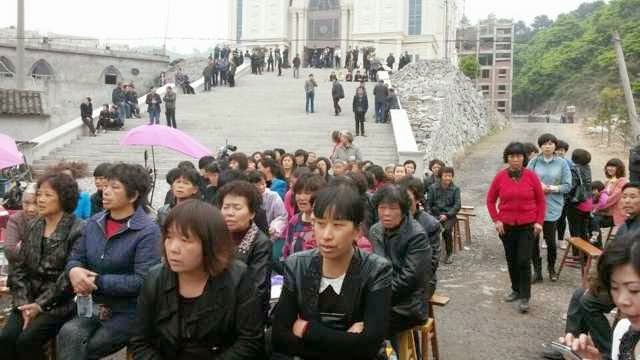 (Wenzhou, Zhejiang—April 23, 2014) The government-sanctioned Sanjiang Church, located in Wenzhou in China’s coastal Zhejiang province, is facing the forced demolition of parts of the church’s property as of Monday, despite reaching a deal with the local government in regards to the matter earlier this month.

“Today, government employees came to Sanjiang Church, and they wanted to take down the cross by force,” an anonymous Christian said. “For the accessory building, they said they would demolish only two floors, but they have already demolished four floors. This has gone beyond our agreement, and they want to force it on us. Now, all the roads are blocked by them, and vehicles with license plates issued outside the town are not allowed in. We need the support of people from outside the town.”

Believers told China Aid that the church was surrounded by variety of large vehicles, which effectively blocked off access to the church at every intersection, beginning at about 3:30 p.m. Monday (corrected April 24, 2014).

“There are five sprinkler trucks here,” one believer said. The fire engines have high-pressure water cannons, which are often used to disperse crowds. “They used the trucks…and tried to disperse us. Now, some believers are having a gathering inside the church and some sit at the gate of the church.”

Some of the other vehicles were buses, some empty, waiting to haul Christians away, and some loaded with SWAT officers. Others included heavy-duty machinery and digging machines, all marked with the words “Six will be demolished.”

“Armed police are on alert, and riot police and SWAT police have surrounded the local area to prevent believers from entering the church. The communication around the area has been shielded,” a pastor familiar with the situation said. Communication was likely cut off to keep Christians from contacting each other and foreign media for interviews, he said.

Christians also reported that a van from the local TV station was on site. They believe that the reporters are there to help the government with the forced demolition in some way.

Before communication in the area was shutdown, believers sent messages to fellow Christians, asking for help and for their presence at the standoff. Church members also contacted foreign media entities, requesting coverage.

“If the government insists on doing things its own way, interferes through brute force with the freedom of faith and threatens or coerces the people to demolish the cross, there will be 100,000 Christians…who will wear t-shirts with crosses and gather in the square in a protest. Meanwhile, believers within the TSPM system will quit the government-sanctioned Chinese Christian Council and Three-Self Patriotic Movement,” one believer said.

An agreement was reached on April 7 between the church and the government, stating that the church agreed to demolish two floors of the accessory building behind the church. The agreement didn’t mention the cross so believers felt it was safe (https://chinaaid.org/2014/04/one-tspm-church-in-zhejiang-finds.html). The original notice, issued on April 3, stated that all the church’s buildings were to be demolished (https://chinaaid.org/2014/04/zhejiang-tspm-church-faces-forced.html).