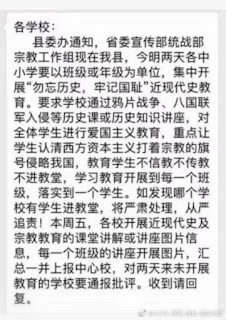 (Midland, Texas—May 20, 2018) A widely circulated, undated online publication from an unknown area in China orders all schools to warn students against having religious beliefs, calling religion a “foreign invasion.”

“According to the notice of the county committee, the religious work group under the publicity department, and the united front work department of the provincial committee in our county, today and tomorrow, the elementary schools and middle schools should organize the students according to their homerooms or grades and educate them on modern history, telling them that they should ‘never forget national humiliation,’” the document reads. “The schools should hold seminars on the opium wars and the invasion of the eight-nation alliance, making the students realize that western capitalism once again is invading our country under the disguise of religion. The schools should make clear to the students that they should not have any religious beliefs, propagandize religions, or enter churches. The schools will be held responsible if students go to churches, and the punishment will be harsh! On Friday, the students should submit pictures of the seminars on modern history and religious education to the central school. The schools that fail to adhere to the aforementioned requirements will be criticized. Please reply after receiving this notification.”

China often accuses non-Chinese religions of being foreign infiltrations of their nation, insisting that religions must “Sinicize,” forcing them to change their ideology so that it aligns with that of the Communist Party. This suspicion leads to intense crackdowns on those who practice a faith, despite the fact that it is unfounded.

Additionally, the central government prevents children from attending religious services and forbids adults from teaching religion to children until they reach 18, even though the Chinese Constitution guarantees freedom of religion for all the nation’s citizens.

ChinaAid exposes abuses, such as those subjected to the religious restrictions imposed on schools, in order to stand in solidarity with persecuted Christians and promote religious freedom, human rights, and rule of law.