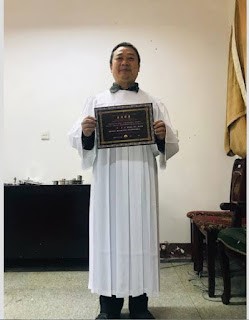 On October 22, Chen Yunfei’s lawyers, Mr. Zhang Lei and Mr. Zhao Qingshan visited him. He looked peaceful, singing a Christian hymn when he saw them. Chen said he will deal with the trial with the help of God’s grace.

Chen Yunfei investigated the outcome of China’s free nine-year compulsory education and spoke with some students on the issue. Consequently, he was taken away from his home on March 25, 2021. Chen told his lawyers he was well in prison. He preached the gospel to those in the detention center because they had a greater need for it.

This, however, is not the first time Chen Yunfei has been arrested. Chen is a renowned dissident and participant of the June 4 student movement. He has been beaten up, evicted, and detained by numerous police stations and detention centers. On March 25, 2015, he went to Chengdu Xinjin County to sweep tombs for the June 4 massacre of student victims with more than 20 petitioners. On the way back home, he was stopped by more than 100 fully armed police officers. Xinjin County Police Department detained Chen on March 26th under the charges of “inciting subversion of state power” and “picking quarrels and provoking trouble”. On March 31, 2017, he was sentenced to 4 years by Chengdu Wuhou district court under the charge of “picking quarrels and provoking trouble”. On the trial day, he appeared in court in his pajamas. He said the purpose was to dream a beautiful “Chinese dream”. After hearing the 4-year sentence verdict, he announced to appeal immediately because his sentence was too light.

He was released in 2019, a few months after the Early Rain crackdown.

Chen Yunfei began to attend Early Rain in 2007. He watched videos about the “Gwangju Uprising” in South Korea and realized how South Korean Christians devoted all their love to the democratic movement. Even faced with persecution, monitoring, and imprisonment, those South Korean Christians embraced the sufferings as holy grace. He was deeply moved by South Korean Christians’ persistence, peace, and justice. He thought: “There is nothing more glorious than devoting myself to justice and to testify God’s love.”