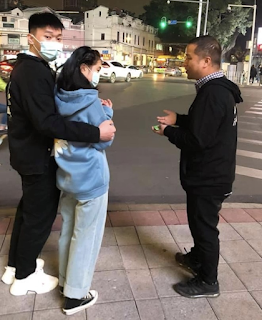 (Guangzhou, Guangdong Province—February 14, 2022) On February 11, Gao Heng, a Christian attending Guangzhou Bible Reformed Church and a suspect of “provoking trouble and picking quarrels”, was tried secretly. No verdict was announced after the trial ended.

Gao Heng became a suspect of “provoking trouble and picking quarrels” for holding a sign reading “Pray for the country” at a subway station on June 4th. ChinaAid sources reported that only authorized attorneys, national security officers, the judge, and personnel attended the trial. Gao Heng’s family, friends, and Christians of the church were not permitted to attend the trial.

Gao Heng held “Pray for the country on June 4th” at Guangzhou Line 2 subway station on June 4th, 2021, the 32nd anniversary of Tiananmen Square Massacre, and then he went missing that night. On June 7th, Wen Yu, a Christian attorney of Guangzhou Bible Reformed, made an inquiry at the police station. He learned that authorities criminally detained Gao Heng was criminally on the charge of “provoking trouble and picking quarrels”. By mid-July, Gao Heng was officially arrested after serving the 37-day criminal detention.

It is not uncommon that Christians like Gao Heng are tried in secret and the verdict is not announced in court. The court does not notify the defense lawyer of the verdict by following normal protocol, but the verdict circulates via bizarre channels. For instance, the 2nd trial of Chen Yu-the defendant in the case of “Xiaomai Bookstore” was scheduled for early December 2021, but a WeChat Official Account called “Zhengjiang Crackdown on Pornography and Illegal Publications” reported the verdict first on January 5, 2022. The official account belongs to Zhejiang Province “Crackdown on Pornography and Illegal Publications” Office. Zheng Jingmei, the mother of Chen Yu—the defendant in the case of “Xiaomai Bookstore”, contacted the defense lawyer right after seeing the news story, and the attorney told her that he was not notified of the verdict and was shocked that he, as the defense lawyer, did not receive the verdict.