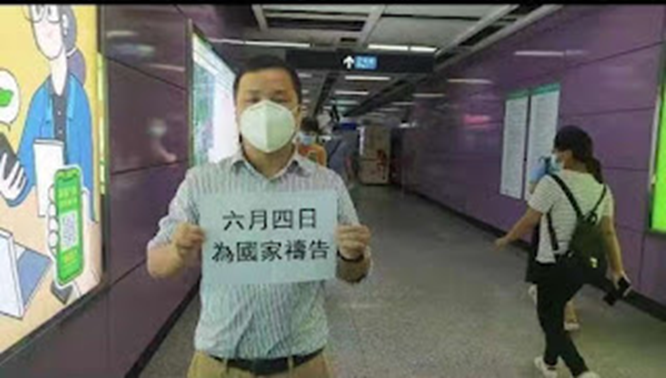 (Guangzhou, Guangdong Province—February 1, 2022) The
Chinese government scheduled a secret trial against Christian Gao Heng on
February 11. Brother Gao is a Christian of Guangzhou Bible Reformed Church. He
was charged with “picking quarrels and provoking trouble”.

On June 4, 2021, the 32nd anniversary of the Tiananmen Square Massacre, Brother
Gao Heng stood at a station of Guangzhou Subway Line Two, holding a sign that
stated: “June 4, pray for the country.” He went missing that night. On the
morning of June 7, his church’s lawyer traveled to the local police station for
information. The lawyer learned from an officer that Brother Gao had been criminally
detained and charged with “picking quarrels and provoking trouble.” He was formally
arrested in mid-July at the end of his detention period, a maximum of 37 days.

On the morning of June 12, Lawyer Wen Yu, a Christian, drove more
than 100 kilometers (62 miles) to meet with Gao Heng at Guangzhou Detention Center.

During his visit with Gao, he expressed warm regards from Brother
Gao’s family, friends, and Brothers and Sisters in Christ. Brother Gao asked the
lawyer to reassure his loved ones.

Gao Heng’s pastor Huang Xiaoning and the church helped to
investigate and implement legal options. Church members also comforted his
father and sister who do not yet believe in Christ. Brother Gao’s father was
threatened by local national security agents and forced to change his lawyer.
Under huge pressure, he also refused to answer church members’ phone calls and
help. His father never revealed any details of the threats. His elder sister
said police went to their father’s home for investigation on June 17. They told
him that Brother Gao would be released in three days. Later his family realized
they lied to his father in order to get more information from him.

Brother
Gao, a gentle and humble person, zealously shares the gospel. On Christmas
night of 2020, he, Pastor Huang, and other Christians of his church shared the
gospel on the streets. At that time, CCP officials had canceled Christmas
celebration events all over the country. On International Children’s Day 2020,
Brother Gao traveled to streets and subway stations with signs:


“I
am a Christian. I object to abortion.

I
object to abortion. A fetus also has a life.

A
good man shall not let his beloved woman have an abortion.”

​Brother
Gao practices the Bible’s teaching in Micah: “to act justly and to love
mercy and to walk humbly with your God.” He focuses on seeking justice in
social, and public affairs. Gao speaks up for injustice and helps petitioners
protect their rights. As a result, police have summoned him in the past. He takes
any opportunity to share the gospel with police officers and national security
agents.

When
he held his sign on the 32nd anniversary of the Tiananmen Square
Massacre which led to his arrest, he also posted a picture of himself to
several social media venues. He wrote the following on his Weibo page:

“People
usually attributed the cause of all social sufferings to the ugliness of
politics and social systems. The root cause, however, evolves from the sinful
nature of human beings. In terms of sinful nature, no fundamental
difference exists between us and decision-makers, directors, and executors.

I
say, “Thank you, God. We are all sinners. But because of Your amazing grace, we
have the opportunity to repent, accept Jesus Christ as our Savior, and become
Your children.”

That
was also his last Weibo post prior to his detention. Authorities arrested him from his
home after midnight on June 5.

“A
man who appeals to pray for his country is arrested by the country?

It’s
not a sin for Christians to pray!

Christians
can pray any day.