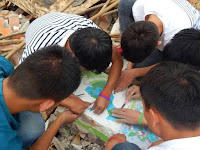 The two-day camp in Luonan County, in the city of Shangluo, was shut down by three people — two from the local police station and one from the local civil administration bureau — on July 14. A church member named Tang said that eight other people from local township governments arrived as the camp began dispersing.

“There were more than 65 children and adults. The students range from second to sixth grade,” Tang said. “The officials said it was [dispersed] because the church was preaching to minors under 18 years old. They only gave verbal notification [of the dismissal] — there was no specific notice.”

Mrs. Wu, who was one of the camp’s teachers, told China Aid said that the officers who came to disperse the camp had a microphone and video camera. “I was inside the house. When they let me out, I saw them holding a microphone and camera, calling to each of the children at the camp. We were asked to disband immediately. We also provided the list they asked for; however, I told them we weren’t doing anything illegal.”