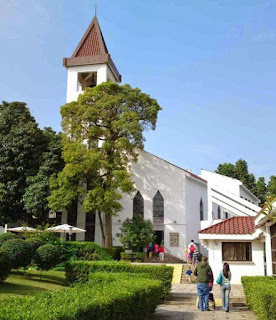 (Shekou Development Zone, Guangdong—June 24, 2015) A large church in southern China that draws hundreds of mainland Chinese and foreign Christians for weekly worship services has been told that if photos of its meetings appear on international social media sites, it would lose the lease on its new meeting site.

The Shekou International School’s church had to move from its previous meeting site when the landlord refused to renew the lease, which expired on June 7. The landlord’s decision was believed to have been due to local government pressure.

The church managed to find a new venue and signed a new lease, but it includes a restrictive condition, according to China Aid’s special correspondent in Hong Kong, Qiao Nong.

“We’ve now moved to a different location. It’s called the Nanou Movie Theater,” said church member Zhang Qiang. “The movie theater gave the church a coercive one-sided agreement that if anyone was found to have taken photos during a church meeting and posted them on Facebook, Twitter or any international media site, then Nanyou Movie Theater will terminate the church’s lease.”

When church members discussed the issue during their Bible study meetings, they pointed out that, because the church meetings are open to the public, it was impossible to guarantee that no one would take photos. Some also worried that someone pretending to be a church member could take photos and post them to Western websites. This means that the local authorities could use this as an excuse to break the lease at any time.

The church in the Nanshan District of Shenzhen, on the Guangdong province border with Hong Kong, draws 600-800 attendees each Sunday, about 30 percent of whom are foreigners, and has a total membership in the thousands. Among them are pastors from the United States, the United Kingdom, India, Singapore, South Korea and other countries.

At least two other house churches in Shenzhen were forced to close in the first half of June due to pressure from police, and the church leaders had no choice but to leave Shenzhen and return to their hometowns.

One of them, surnamed Fang, said he wanted to keep a low profile, and would only say that he was safe and did not want to talk about events in the past.

“They should fight back, because Christians must remain committed to God’s justice, and stand in God’s position to fight against the kingly powers of this world. Especially when the kingly powers encroach upon freedom of belief, they must step forth and defend their rights,” Guo said. “The Bible puts particular emphasis on the point that God hates evil. We are not fighting back violently. It’s nonviolent, it’s on the basis of the existing laws, to defend rights.”