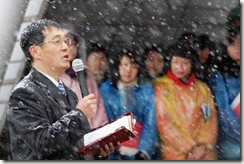 On October 23rd, Shouwang had her twenty-ninth Sunday outdoor worship service. Pastor Tianming and other pastors and elders were still detained at home and were not able to go out. However, a miracle happened! Believers surprisingly found that elder Liu Guan actually went to Zhonggang Square, the planned location for outdoor service on Sunday morning! Pastor Xiaofeng started a post on Google Buzz, informing believers updates. We did not know how elder Liu Guan managed to “break the blockade,” but this news was rather exciting. Pastor Xiaofeng was “forced” to be on-site to broadcast news on buzz, which drew him closer to the congregation as a comrade in the battle.

Everyone was concerned about elder Liu Guan and was asking around where he was taken during the day. We found out later that elder Liu Guan was detained at Donghu Sub-district Office when he was released home around 6:00 pm on Sunday afternoon. There were other thirteen believers who were sent to different police stations. One of them is Yuan Haining from Xinshu Church, who has joined outdoor service for many times. Last time during her detention, policemen did not allow her to take her baby with her, and did not release her until midnight, which was rather inhumane. This time she was detained at Longyuan Police Station of Changping District. The chief police there ignored negotiations from believers, and did not release her until 8:00pm Sunday night. Pastor Wang Shuangyan of Xinshu Church led some members of Shouwang waited outside the police station till she was released. We pray that God’s grace and joy be with sister Haining and her baby, and bless them with peace and health. Again, we want to express our appreciation and respect for Xinshu Church and Pastor Wang Shuangyan, who have been accompanying believers of Shouwang along the way since our first outdoor service; they truly showed us the love from God toward God’s children in God’s family in suffering together with us in the midst of persecution. May God’s grace continue to protect and bless Pastor Wang Shuangyan and believers of Xinshu Church.

Some believers gathered in parks and residential areas to have outdoor service near the planned location, and some believers went to apartments of their small group leaders to worship since they were detained at home. The guards watching believers actually witnessed fellowship of believers and heard the Word of God each week; God has brought the Gospel to many guards and the staff of sub-district office even though his children are being watched by them. As for all the people in police stations and national security offices that are involved, from the chief police officer, to policeman in charge of a small area, they heard the Gospel as believers “entered the lion’s den” to sow seeds. We believe that the Holy Spirit who causes the growth will continue to lead them and reap the harvest.

Chief policemen, who treated believers as criminals, are now attracted to books in the Bible like Genesis. A policeman was rather frank yesterday admitted that he was reading the Bible “for his work.” We give thanks to God for Shouwang’s members who are so passionate in sharing the Gospel; it leaves a remarkable page in the history of Chinese Church.

Till midnight of Sunday, ten believers were released home, and the other three believers were still under detention. They are brother Naixing, Zhou Wen, and sister He Guilan. We invite you to pray for these three believers who were not able to go home in cold night that God will protect them and sustain them.