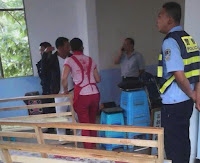 One member of the Harmony Church in Panzhihua likened the June 16 raid to a scene from the Campaign to Suppress Counterrevolutionaries launched by the Communist Party shortly after taking power in 1949 to root out opposition to its rule.

More than 10 police and religious affairs bureau stormed into the private home at about 9:20 a.m., saying that “someone reported that you people were a cult.” Without showing any identification, the authorities ordered everyone to stay put and demanded that the prayer meeting be halted.

“They were shouting and gesticulating wildly… The Christians were badly frightened,” the unidentified church member said.

The police and official videotaped and photographed the raid, took down the numbers of everyone’s government ID card and ransacked the premises, leaving with the church’s books and other literature, account ledger and offering box.

Despite failing to find any contraband or illegal items of any kind, the authorities took two women to the police station for questioning. They were questioned separately for two hours, and the church was told that it could not hold any more meetings because it was an unregistered, privately organized meeting site.

On June 23, the Renhe branch of the Panzhihua Police Department notified the church to come claim the items that the police been confiscated and reiterated the warning that the church was forbidden to meet.