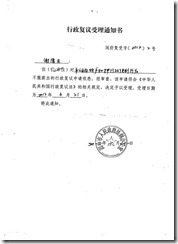 (Langzhong city, Sichuan — August 13, 2012) A house church in Zhanggonggiao Village, Qili-Banshichu, Langzhong City, Sichuan Province, was raided in May 2012, and “outlawed.” Church property was confiscated, and sister Xie Deyue, a church leader, was subjected to persecution. In June believers of the church hired a rights defense lawyer according to law to file an administrative review and administrative lawsuit.

(Click on small pictures to see enlarged versions: Notice on the acceptance of administrative review)

Sister Xie Deyue, who is 43 years of age became a Christian in 2000. During September, 2011, she and local pastor Li Ming each personally spent 2,000 yuan to purchase 50 chairs and a pair of second-hand speakers for holding church services; since then they have held worship gatherings at their homes, which were mainly attended by family members and friends.

On May 29, 2012, at approximately 9:00am, three policemen, who did not identify themselves, broke into Xie Deyue’s home. Without showing any identification demonstrating they were law enforcement agents, they began taking photos and making audio recordings. Without producing any legal papers the agents took Xie to the Qili Town police station where she was interrogated for three hours. The police demanded that Xie remove the stools and chairs from her home within three days and never hold house meetings again. They threatened to arrest her if she disobeyed their orders. At approximately 3:00pm the same day, five policemen, with village official Ma Xinglin showing them the way, appeared at Xie’s house and, without identifying themselves, required her husband Chen Dawei to permit them to enter and inspect the premises. They then demanded Chen remove the seating from his home within three days. At 9:00am, on May 30, about 20 people who claimed to be agents of the Domestic Security Protection Department of Lanzhong Municipal Public Security Bureau and Qili Town police station showed up with police vehicles, minivans, and rented tricycles. Without showing any identification papers, nor a search warrant, they forced their way into Xie’s home and took everything; they even ripped the Spring Festival scrolls and cross-stitch embroidery from the walls. They then took seven-month pregnant Xie to the police station. At her insistent request, the police reluctantly produced a list of confiscated items.

Infuriated by the unlawful actions of the local police, which violently interfered with citizens’ freedom of religious belief and practice, believers of the church decided to hire rights defense lawyers to protect their rights and interests through legal proceedings.

On June 14, rights defense lawyer arrived at Langzhong and drafted an “application for administrative review” and an “administrative indictment” on behalf of Xie Deyue. On June 18, the “application for administrative review” was delivered to Langzhong Municipal People’s Government. The government agent provided a receipt and said that they would determine if the application would be accepted in five days. On June 21, the Legal System Office of Langzhong Municipal People’s Government decided to accept the case and issued a notice of acceptance of the case.

Below is the full text of the Administrative Indictment.

On May 29, 2012, at about 9 A.M., three policemen who did not identify themselves broke into the plaintiff’s home. Without showing any information to identify themselves as law enforcement agents, they started taking pictures and audio recordings of the plaintiff’s home, and without producing any legal papers on summoning, they took the plaintiff to the Qili Town police station for interrogation which lasted three hours. The police demanded that the plaintiff remove the stools and chairs from her home within three days and never hold house meetings again mainly attended by family and friends, and threatened arrest if she disobeys. At about 3 P.M. that day, another five policemen asked the plaintiff’s husband Chen Dawei to open their home door for inspection without identifying themselves first and demanded Chen to remove the furniture from his home within three days. At 9 A.M., May 30, about 20 people who claimed to be agents of the Domestic Security Protection Department of Langzhong Municipal Public Security Bureau and Qili Town police station showed up with police vehicles, minivans and rented tricycles. Without showing any identification papers and search warrant, they broke into the plaintiff’s home and took everything; they even ripped off the Spring Festival scrolls and cross-stitch embroidery from walls. The also took the 7-month pregnant plaintiff to the police station. At her strong request, the police reluctantly produced a list of confiscate items. On June 28, the defendant gave the plaintiff the administrative punishment of a 200-yuan fine and the confiscation of books and chairs.

The plaintiff contends that the defendant’s administrative punishment decision has violated both legal procedures and corresponding substantive laws and ought to be revoked. Reasons are listed as follows:

I.   The defendant violated legal procedures.

4.  Article 24 of the Law on Administrative Compulsory Enforcement says, “The administrative organs shall follow the procedures prescribed in Article 18 of this law when implementing close-down and confiscation, and make and deliver on the spot the Close-down/Confiscation Decision and the list of confiscated items.” But the defendant by far still has not made and delivered the Confiscation Decision to the plaintiff.

The above does not cover all the legal procedure violations committed by the defendant, but the violations listed here are sufficient in constituting as severe violations of law and in rendering the administrative punishment unlawful. Our country is ruled by law. Administration by law is a key component of constructing rule of law in China. Law-violating administration must be severely prohibited.

II. The defendant’s administrative punishment is not grounded in facts.

III. The administrative punishment decision made by the defendant does not have legal grounds.

2. The plaintiff’s behavior is legal and shall not be interfere with by the Religious Affairs Bureau, not to mention the Public Security Bureau. Article 3 of the White Paper “The Status of Freedom of Religious Belief in China” (issued by the Information Office of the State Council on October 16, 1997) says, “all the normal religious activities conducted at the homes of religious believers according to religious customs, such as Sunday worshiping, praying, explaining the scriptures, preaching the Gospel, Mass, baptism… shall be administered by religious organizations and believers themselves and be protected by law without interference from anybody else… Religious activities conducted by Christians according to customs of Christianity at their homes such as Bible reading and praying attended primarily by family members and friends (customarily referred to by Chinese Christianity as “house gatherings”) are not required to register.” Therefore, the plaintiff has the right to hold house gatherings at home attended primarily by family members and friends and is not required to register. Any interference from any government agency is against the law.