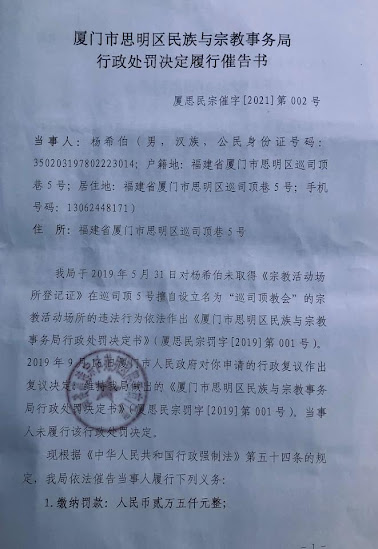 We the bureau urge the litigant to fulfill the following obligations in accordance with Administrative Coercion Law of People’s Republic China, Article 54:

In addition, the exigent notice requires that Minister Yang fills out the General Payment Form at his bank where he has an account and make the payment to Xiamen City Siming District Bureau of Finance within 10 days from the day he received the notice.

As Xunsiding Church, the largest house church in Xiamen, holds fast to the stance of house churches in Fujian Province, Bureau of Ethnic and Religious Affairs officials have targeted and heavily oppressed members. On May 19, 2019, authorities illegally shut down Xunsiding Church, as well as church campuses. The CCP dispatched a large number of police to 5 Xunsiding to monitor attendees, and raid the church on Sundays. During raids, police:

Siming District Bureau of Ethnic and Religious Affairs held the hearing, which lasted for two and a half hours, on the morning of August 13. Due to the pandemic, as their attorney could not appear, Minister Yang and Mrs. Wang had to defend themselves. Minister Yang noted that it appeared evident that Bureau of Ethnic and Religious Affairs officials did not intend to change the administrative penalty.

Half a month later, when Minister Yang received the 50,000 yuan fine, he called it the Heaven award:

The Exigent Notice of Administrative Penalty Enforcement notice, which the Siming District Bureau of Ethnic and Religious Affairs issued to me two years ago, has not been resolved. Although the court failed to process their complaint at that time. CCP court officials now demand that I pay the fine. At this time, however, they have more aggressively begun to coerce payment.

God’s people just need to wait for God in peace.

~ Yu Bing, ChinaAid Special Reporter
###
If it is possible,
as much as depends on you,
live peaceably with all men.
~Romans 12:18 (NKJV)
China Aid exposes abuses in order to stand in solidarity with the persecuted and promote religious freedom, human rights, and rule of law. If you wish to partner with us in helping those persecuted by the Chinese government, please click the button below to make a charitable donation.