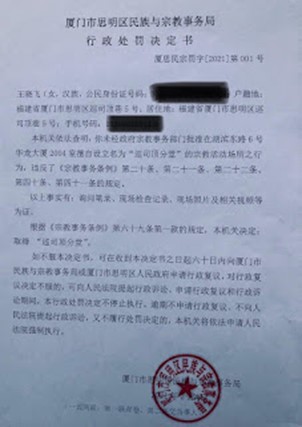 Siming District Religious Affairs Bureau notice to wife of Minister Yang Xibo: “You have violated Articles 20, 21, 22, 40 and 41 of….”

While out preaching on February 24, religious affairs bureau staff arrived at my home and interrogated my wife. Today, she received a punishment notice [from CCP authorities], but a certificate of merit (in the eyes of God). Officials targeted my wife because I was not at home. I received a similar notice in 2019.

Thank the Lord—my wife and I are a good match.

On May 19, 2019, CCP authorities banned Xusiding Church, the largest house church in Xiamen. Afterward, members gathered at different locations. Authorities banned each of these venues, however, one after another.

During the Chinese New Year, authorities not only banned Xiamen Xunsiding Church but also prohibited numerous other churches in this area’s cities from holding services or gatherings. Officials banned more than 10 house churches in Yanjiao County, Hebei Province.

Staff from the religious affairs bureau, police department, national security agency, and community management office performed joint actions. Without showing any search warrants, CCP agents confiscated possessions of churches and sealed their doors. The targeted churches, all house churches, had refused to join government-sanctioned Three-self churches. They had not registered at the religious affairs bureau and did not obey the orders the CCP imposed.

Most house churches in this area with more than 100 members have compromised and registered at the religious affairs bureau. After local community members report smaller churches, usually with only 20 to 30 members. not willing to submit to Three-self church regulations, authorities raided these house churches. On February 23, the district religious affairs bureau also issues a ban notice on a house church in Yanglinzi Village, Qijia County, Taizihe District, Liaoyang City, Liaoning Province, ordering the church to stop all religious gatherings. The notice also demanded that the church remove all religious signs, slogans, and their offertory box. If church members fail to comply with the notice, authorities warn, they will penalize the church and require them to pay a￥200,000 [240,921 USD] fine.

*Article 20 The following conditions shall be met for establishing a religious venue:

(1) The purpose of establishment is not at variance with the provisions of Articles 4 and 5 of these Regulations;
(2) Local citizens with religious belief have the need to conduct regular collective religious activities;
(3) There are religious personnel, or other persons that meet the requirements of its religion, who is meant to preside over religious activities；
(4) There are the necessary funds that are from lawful sources; and
(5) There is a well-planned layout that meets the requirements of urban and rural planning and does not interfere with the normal work or daily lives of the surrounding units and residents.

**Article 69 Where a religious venue is established without authorization, or a religious venue continues to engage in religious activities despite the revocation of its registration or registration certificate, or an institution of religious education is established without authorization, the religious affairs department shall, together with the relevant departments, impose a ban on it, and confiscate the illegal gains or belongings, if any, and if the specific amount of the illegal gains cannot be determined, a fine of not more than 50,000 yuan shall be imposed; and if a violation of public security administration is committed, a punishment for administration of public security shall be imposed in accordance with law.

Where a non-religious body, non-institution of religious education, non-religious venue, or non-designated place for temporary activities organizes or holds religious activities or accepts religious donations, the relevant religious affairs department shall, together with the relevant departments of public security, civil affairs, construction, education, culture, tourism and cultural relics, order it to stop such activity, and the illegal gains or belongings, if any, shall be confiscated and a fine of not less than one time but not more than three times the amount of illegal gains may also be imposed; if the specific amount of the illegal gains cannot be determined, a fine of not more than 50,000 yuan shall be imposed; and if a crime is constituted, criminal liability shall be investigated for in accordance with law (http://www.sara.gov.cn/flfg/330350.jhtml).

Report by Yubing, ChinaAid Special Correspondent
###
Though one may be overpowered by another,
two can withstand him.
And a threefold cord is not quickly broken.
~  Ecclesiastes 4:12 (NKJV)
China Aid exposes abuses in order to stand in solidarity with the persecuted and promote religious freedom, human rights, and rule of law. If you wish to partner with us in helping those persecuted by the Chinese government, please click the button below to make a charitable donation.