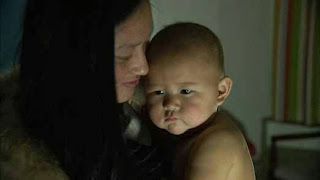 The case of a Christian pastor held at an unknown location in China shows how government officials persecute religious groups.

A Chinese Christian pastor and 23 members of his congregation have been held at an unknown location illegally and without access to lawyers since mid-November.

The case of Pastor Zhang Shaojie is evidence that in parts of China the violent suppression and unlawful arrests of the faithful by local government officials continues.

China’s poor record on religious tolerance has been showing signs of improvement in recent years.

The Communist government had pledged to improve the rights of religious groups but this case suggests challenges remain.

Our research led us first to a small town on the border of Hebei and Henan Provinces.

We arrived at 1am to meet the daughter of Pastor Shaojie. Her name is Zhang Yunyun and she is a mother on the run.

We meet her in the hotel room she is hiding in for the night with her 11-month-old daughter Jessie.

Yunyun is on the run because she fears the arrest of her father could lead to her own detention.

She has received repeated threats on the phone from officials. One caller threatened to “wipe out her family” if she talks to reporters. But she is undeterred.

It is nearly a month since she last saw her father. Speaking in whispers, she explains what happened.

“My father went to work (in the church) as usual, it was a Saturday.

“Suddenly a dozen police came, they forcefully took my father away.

“There was no paperwork at all, they just took him away. we haven’t seen him since.”

We look at photographs she took of the government men who turned up at the church on November 16.

“Government,” she says, pointing at a group of plain-clothed men. They look threatening.

She describes how they tied up her father and took him away with some of his parishioners.

She selects another photograph and points to some of those who have disappeared.

This is a case that pits a Christian community, which had been growing in numbers and influence, against a local government that has seized the land bought for a new church.

Our conversation with Yunyun wakes Jessie, who begins to cry. It is time for us to leave.

She shows us the location of her church on a map. It is in a town 20 minutes’ drive away, over the border in Henan Province.

We arrive at Nanle County Church at dawn. It is a rundown building in centre of the town. The front door is closed but a side door is ajar. We go inside.

It does not resemble a European Christian church. It looks more like a theatre: 600 or so seats and a large stage with a pulpit in its centre.

This is where Pastor Zhang and his worshipers were dragged from a month ago.

There are two types of church in China: some are sanctioned and authorised by the state and others are not.

Nanle County Church is sanctioned and so, in theory, its worshippers should face no problems from the authorities.

As we are looking around, some of the parishioners emerge from a side room. They recall the day of the arrests.

“Pastor Zhang was negotiating with our local government here. Suddenly a dozen people arrived, and they took Pastor Zhang away,” one woman says.

“We did some charity work, perhaps some of that was too much? They always discriminate towards religions.”

“We are very worried about my dad,” another says.

“My mother was arrested here too, at the church. No arrest warrant, no evidence, just arrested.”

I ask whether it is hard to practise their religion in China.

“I think it’s really unsafe here and there’s no freedom. Whenever we come to services there are always restrictions.”

The parishioners then receive a phone call. It is from one of a group of lawyers who have taken up the case and who have just arrived at the prosecutor’s office across town.

We drive over to meet them. For 10 minutes we chat to them about the case.

“Christianity in the Chinese system does not have any real standing,” one lawyer explains.

The lead attorney for the detained Christians is Xia Jun. “Our rights as lawyers to meet our client have been blocked,” he says.

“I’ve been in Nanle for more than 20 days, I’m representing Pastor Zhang Shaojie. We went to the detention centre to see him five times, but all been denied.

“Four times I went to the Public Security Bureau to report about it, all been rejected. Then I was followed, every day. I drive around the roundabout three times, the car following me drove three times too.”

They explain the complexity of the case. It combines a number of themes: intolerance of religious groups, land-grabs for financial gain, and rampant local corruption by officials who operate above their own laws.

“The key problem is the power of officials in our country. They behave like uncaged monsters … out to harm us all. For them, the law doesn’t exist,” Mr Xia says.

Moments later we all discover what he means. A coach pulls up next to us. We assume those who disembark are more Christian supporters, but they’re not. They are just the opposite.

In a split second, our civilised chat with the lawyers turns into a melee of chaos. The coach-load of women backed by some men attack the lawyers, the Christians and us.

One of the lawyers is beaten and kicked in front of us. Our camera is then pulled from the Sky News cameraman’s shoulder and damaged.

We retreat inside the prosecutor’s office, which turns out to be deserted. One of the lawyers puts a chair leg through the door to stop the mob from entering the building. It doesn’t work.

The mob move into the lobby and we retreat with the lawyer and one of the Christians into another room: a dead end.

The lawyer barricades us all inside the small room using a sofa, a chair, a desk and a drawer to wedge the door handle. Inches away on the other side of the door the determined mob are trying to get to us.

“They are paid and backed by the local government. They come and go as required. All this is organised behind the scenes by the government,” Mr Xia explains.

The same group had attacked him the previous day.

We watched through the barred window as another lawyer, stuck outside, is struck on the head with a small rock.

“This case is for pure religious causes,” Mr Xia says.

“More than 20 people were arrested. Pastor Zhang Shaojie and most of them are church staff: the core leaders of the church.

“When they are arrested, all the activities like worshiping and services, can’t take place as normal.”

For four hours, the local government rent-a-mob did their best to get inside. We watched a police car pull up outside and then drive away again.

The violent spectacle is a demonstration of a determined intolerance of religion incited by a corrupt local government.

The lawyers tell us that they believe the government seized the church land because it can be used for their own lucrative construction projects.

We call the Chinese Foreign Ministry in Beijing, who “handle” foreign reporters in China, to explain the situation.

Eventually, the same authorities who refuse to tell anyone why they are holding Pastor Zhang and his congregation escort us out of the building and out of the town.

They have given us safe passage out but continue to intimidate the Christians within their town.

“I miss my father very much,” Zhang Yunyun had told me the previous night. It is exactly a month since she last saw him.

I ask if she thinks he will be home for Christmas.

She and her baby daughter Jessie remain on the run, in hiding and frightened.