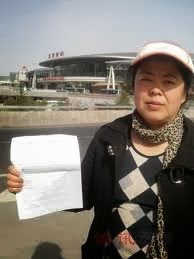 China Aid Association
(Beijing—Feb. 26, 2014) Ten believers from Beijing Holy Love Fellowship were released on Sunday and Monday after their initial detention on Jan. 24 in China’s capital; however, three Christians are still held at the Beijing Municipal No. 1 Detention Center.

Lu Dongli, Zhang Haiyan and Yu Yanhua remain in custody following their detainment on Jan. 24 when they tried to attend a bible study and to bring medicine to Zhang, who was having heart problems, at his home (see ).

Liang Yanhe was previously released, however little is known of the situation surrounding her discharge. Additionally, Wang Biao and his son, who were visiting from Tianjin, were sent home at an unknown time.

At some point after the initial detainment of the group of Christians, Kang Suping, having heard the news, went to the Liyuan Police Station in the Tongzhou District of Beijing, where the believers were detained before being transferred to the Beijing Municipal No. 1 Detention Center, to inquire about the incident. Kang was taken into custody at the police station.

While in detention, Yang Jing suffered a heart attack and was sent to the Beijing Municipal Security Bureau Hospital for treatment. At the hospital, Yang only received a general examination, forcing him to seek further treatment for his heart at another hospital upon release.

Many of the Christians who were originally detained are from other areas of China, visiting Beijing to petition the government about issues in their hometowns and living in shacks. Because they do not resident permits to live in Beijing, these individuals are at risk of being sent home.

Pastors at Holy Love Fellowship, including Xu Yonghai, help many petitioners camped out in Bejing. As a result, many decide to become Christians and begin worshipping at the church.

ChinaAid asks Christians worldwide to pray for the three Christians who remain in detention. We call on the Beijing Public Security Bureau to release Lu Dongli, Zhang Haiyan and Yu Yanhua immediately and unconditionally. ChinaAid will continue to monitor and update this story as developments arise.