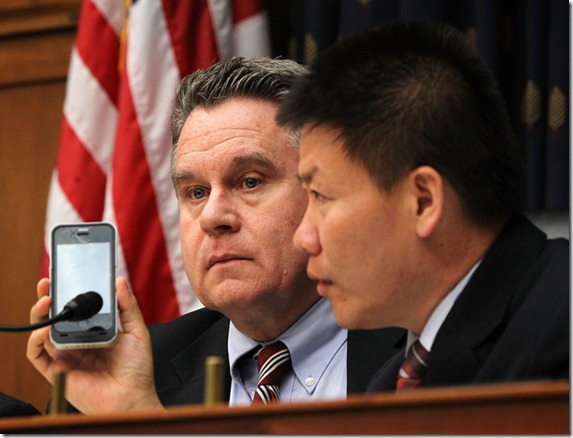 Pastor Bob Fu fled China 16 years ago with his wife under threat of persecution and is now a central player in helping mainland dissidents make the journey out
When Bob Fu set up his ChinaAid Association in 2002, his main mission was to advance religious freedom on the mainland. Instead, it’s his constant involvement in the rescue of Chinese dissidents that has put him in the international spotlight.

The 44-year-old Fu, a pastor who fled China for the United States via Hong Kong in 1996 to escape persecution, has using his connections in the US and the international community to help dozens of dissidents and other Chinese citizens subjected to official threats and harassment to leave the mainland.

His involvement in the rescue of Shandong  blind activist Chen Guangcheng  has showcased how he has become a key contact for some US officials, in a controversy that has put Sino-US ties to the test.

In two US congressional hearings on Chen, convened by Congressman Christopher Smith to put pressure on the Obama administration, Fu phoned the blind activist in his Beijing hospital room, allowing Chen to testify directly about concerns about himself and his family.

“When Chen escaped from house arrest in Shandong, we immediately set up a round-the-clock mechanism for giving him international backup. I dispatched information on Chen to government officials, especially US
officials, telling them how he escaped and what should be done,” Fu said,
adding that US officials he had spoken to included Michael Posner, the US Assistant Secretary of State for human rights.

“This is a big mission that people both inside and outside of China need to put enormous efforts [into] to make it succeed.”

Fu declined to give details of the operation, saying only that more than a dozen people in China were involved and that the international campaign to save Chen intensified in November, when there were rumours that Chen might be dead.

“I set up an international coalition around that time, lobbying the support of politicians in the US and other countries, such as the United Kingdom and the Netherlands,” he said.

“I gave them a profile of Chen, and told them what they could do. “If the US refused to take Chen, some other countries, such as Australia and New Zealand, said they were willing to do so.”

But even with the international support, Fu said, getting Chen out of his house in Linyi  was extremely difficult because of the tight surveillance.

He said, generally speaking, it took only a few weeks to get a dissident out of China if they agreed to leave and there was another country willing to take him. Chen’s case was delicate, however.

“He was kept incommunicado for a long time and security for him was basically round-the-clock. Even people who wanted to visit him were attacked by thugs, and people were deployed outside his bedroom to
watch him closely,” he said.

“A Taiwan couple briefly met Chen’s wife, but they were detained by thugs afterwards and had their belongings snatched. Even briefly meeting his wife caused trouble.”

One of the notable dissidents Fu has helped is doctor Gao Yaojie , who feared that her life was at risk after uncovering the spread of the Aids virus through illegal blood sales, in Henan  province.

Fu had not met Gao before she went to the US in 2009, but said he decided to help her because he was touched by an e-mail Gao sent to a group of activists, describing how she was under threat for offending the authorities.

He said he liaised with US Secretary of State Hillary Rodham Clinton to arrange a US visa for Gao, and asked his aide in Guangzhou to help get her out of China. Security around Gao was not tight, Fu said, but his assistant still “got into trouble” with the authorities.

Fu also had a hand in the case of Geng He  , the wife of jailed human rights lawyer Gao Zhisheng , who fled to the US in 2009 by getting refugee status in Thailand.

In some cases, leaving China does not mean dissidents will find sanctuary. In February 2009, Zhang Qing,the wife of lawyer Guo Feixiong who supported Gao Zhisheng and was sentenced to five years jail in November 2007 for engaging in illegal publishing, fled to Thailand with her two children to apply for refugee status with the UN High Commissioner for Refugees, the United
Nations’ refugee agency.

But the agency rejected the application. Fu then addressed the family’s request to the Obama administration, but the US government did not allow the family to be extradited without UN approval. Desperate, Fu arranged for the family to use other people’s US passports, including his son’s, to leave Thailand for the US, where they were later granted political asylum.

“I could have been put into a US jail for that,” Fu said. “I didn’t know
what to do at that time, and I just kept praying until the matter was resolved
and I was not sent to jail.”

Fu said he knew the risks of a rescue operation because he went through a similar experience 16 years ago. Fu was forced to attend special political study sessions and constantly write self-criticisms after leading a group of students from Liaocheng University in Shandong province, where he studied English literature, to join the Tiananmen protests in 1989 in Beijing.

During that time, he read a book given to him by an American Christian teacher about a Chinese intellectual who was addicted to opium in the early 1990s and changed his life after embracing Christianity.

Fu and his wife, Heidi Cai, then began attending an underground church, even while he was teaching English at the Communist Party’s central school. In 1995, the two were arrested and taken into custody for two months.

Soon after their release, Fu was told that they would be jailed again and feared that his pregnant wife would be forced to have an abortion because she did not have a permit to have a child. The couple then decided to leave China, staying in Hong Kong for about eight months and leaving for the US a few days before the handover.

Unlike most other dissidents whose influence diminishes after leaving China, Fu has stayed relevant to China with ChinaAid, which he founded after an official crackdown against an underground church in Hubei  province led to five Christians being sentenced to death.

ChinaAid has offices in the Texan city of Midland, Washington, and Los Angeles, and an annual budget of US$1.5 million. Last month, Fu raised nearly double his original target of US$200,000 at the association’s annual gala. Most of the funds will be used for legal training and sponsoring underground churches on the mainland, he says. 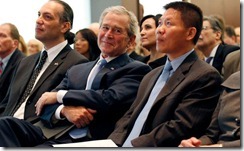 Part of Fu’s success in the US has been his fluency in English, which enabled him to integrate with Americans. That is in contrast with some exiled dissidents who, once in the US, refuse to interact with mainstream society and often become involved in infighting within the Chinese community. “Some [exiles] go only to Chinese places and take part in Chinese activities, because of the language barriers. They do not learn English even after staying here for a long time,” he said.

Fu spent his first seven years in the US in Philadelphia, and moved to Midland in 2004. Midland has only a small Chinese community, but the oil town is also the childhood home of former US president George W. Bush and his wife, Laura. The Midlanders are also known for their association with Bush in raising concerns about difficulties faced by Christians around the world.

“I know my mission is to advance religious freedom in China. I don’t want to get into the infighting among Chinese dissidents and I am not only working with Chinese here,” he said.