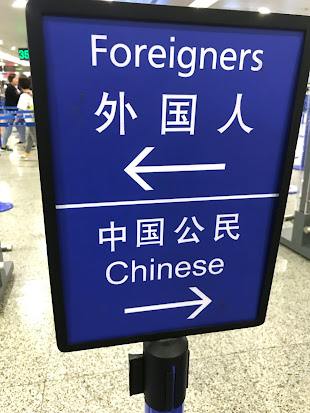 One way for foreigners; another for Chinese.
(Photo: Flickr)

(Beijing, Hebei Province—Dec. 1, 2020) A draft of “detailed rules” on “foreign religious activities in the People’s Republic of China” which China’s State Administration for Religious Affairs (SARA) published reportedly remains open to receive corrections and suggestions from the public until December 17. The Chinese Communist Party’s drafts, however, typically remain basically uncompromising.

“Rules for the Implementation of the Provisions on the Administration of Religious Activities of Aliens within the Territory of the People’s Republic of China (revised draft for solicitation of opinions)” contains a total of 40 articles divided into five chapters.

Wang Ahicheng, a writer for AsiaNews.it, reports that the proposed new rules:

o   [ensure] no religious symbols visible on the outside.

The regimented rules on foreigners’ religious activities include 40 articles with directives on gatherings,  places,  characteristics of foreigners, contents of meetings, exchanges between foreigners and Chinese,  religious materials, and the quantity that can be imported (books, videos, etc…), as well as legal responsibilities for foreigners. The last chapter (the 4th, Nos. 30-36) speaks of “punishments according to the law,” and regulations on religious activities, It also notes laws on “public security sanctions” and “anti-espionage.”

The subtle suspicion that religious activities constitute “espionage” runs throughout the draft. Number 4 states that “China respects the religious freedom of foreigners in its territory and protects religious activities according to the law.” The CCP subjects every group, individual, or activity relating to religion, however, to strict conditions recently verified by the Office for Religious Affairs of the city; county; province; nation.

Number 5 stresses that for “foreigners” to carry out religious activities in China, they must:

Catholics may struggle with the terms “independence” and “autonomy,” as they understand these concepts to indicate “independence” from the pope and “autonomy” from the universal Church. Although an agreement exists between China and the Holy See on the appointment of bishops, these drafts stipulate that a foreigner (like the pope) cannot “interfere or dominate the affairs of Chinese religious organizations” (No. 21, 1).

To further denote the sense of “independence” and “autonomy” of Chinese religions, rules specifically state that the religious activities of foreigners can only include foreigners among their members. This restriction prevails even if foreigners hold religious events in local “temples or churches” and ask Chinese personnel to perform a particular rite or sacrament (Nos. 17 and 20). Foreigners must present all documentation for the group’s registration which must only include foreigners, nevertheless—these must be documented in Chinese (see No. 13.7).

The draft of rules additionally forbids foreigners to establish religious groups, activities, or schools. Foreigners cannot proselytize among Chinese citizens, nor can they recruit followers or accept donations from them (No. 21).

Each group must register and wait for authorization of activities with the determination to be given— “within 20 days.” Registration for foreign activities mandates the inclusion of names of the participants, their phone numbers, nationality, type of visa, residence, type of religious activity, deadline, and security measures (cf. Nn. 10, 13).

The CCP even subjects religious materials to SARA’s permissible qualifications. Foreigners cannot bring more than 10 copies of a book, pamphlet, or audio-video into China or countries within its jurisdiction. To obtain permission to introduce materials, foreigners must submit documentation explaining its content. Content must not “harm China’s national security” nor can it be “contrary to Chinese principles of religious independence and self-government” (No. 25).

Religious and cultural exchanges may include foreigners for conferences, courses, or sermons (No. 22), only if foreign personalities demonstrate proper attitudes. In addition to adhering to the aforementioned “independence” and “autonomy” constraints, foreigners must “not speak or perform antagonistic actions towards China” (No. 24). They cannot be hostile to China (No. 8).

With the myriad of the amended CCP limitations in the proposed draft, coupled with volumes of papers required to receive permits, foreigners will find it increasingly difficult to host religious activities and events, even with SARA’s approval.