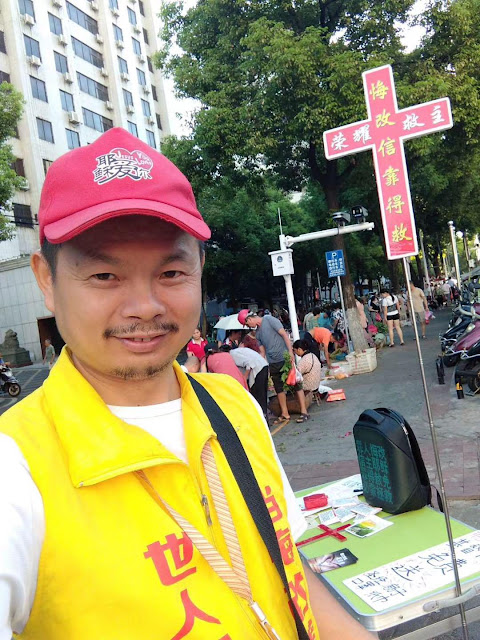 (Hengyang, Hunan province— October 19, 2022) On October 12, Christian Chen Wensheng was summoned to the local police station. They asked him not to share the gospel on the street before the 20th National Congress of the Chinese Communist Party. After the police summons, Chen and his wife were taken to a mountain for a half-month “vacation.” He reportedly used the time to rest and study.

According to Chen Wensheng, local government staff came every day to his home to talk to him and take pictures. On October 8, local police officers invited him and his wife for lunch. As soon as the police entered his home, he handed out gospel leaflets and said, “Officers, I’m glad you come again. Jesus loves you and blesses you!” They tried again to persuade him to join the local Three-Self church. They promised that if Chen was willing, they would let him replace the two pastors of the local church or give him the opportunity to deliver speeches to large crowds of audiences in various locations if Hunan province. Brother Chen took this opportunity to share the gospel with them and explained the reason why he is not willing to join the Three-Self Church. When they realized it was impossible to change his mind, they asked his wife to talk to him. He explained to them what is true faith in a wise way.

Chen Wensheng, known as the “gospel warrior,” is a Christian attending Hengyang Xiaoqun Church in Hunan province. He was a drug user for over ten years before he converted to Christianity. He initially heard the gospel at a rehab center and became a Christian, and eventually, he got sober because of the gospel.

In 2020, national security officers told Chen that he proclaimed the gospel four to five times each month in various regions to over a thousand people. Chen Wensheng was detained multiple times for sharing the gospel, six times in 2021. He spent the 2021 New Year in a detention center. After 10 days, he and his 84-year-old mother shared the gospel and handed out gospel leaflets on the street, and they were detained again. Chen Wensheng said that he would never give up the mission God granted him and remained determined to spread the gospel in prison.